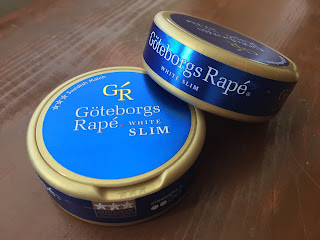 NOTE:  This is the old review.  Check out the new review - here.

I recently discovered a new Göteborg's Rapé White Slim product at Snus.com, which is Northerner.com's Norway e-store. This caught me off guard and had me wondering a few things. Was this product going to replace XRANGE GR? Was this product going to be part of a new product line? I spoke with a friend at Swedish Match who helped clarify my confusion on this. He told me that the XRANGE line wasn't going anywhere, and that this was a product exclusive for the Norway market. Apparently, slim portions are extremely popular there, so this product would be completely replacing Göteborg's Rapé (White Large).  I was pretty bummed, because I do really like these cans.  A friend of mine helped me get ahold of a few cans of this to try out, and the first thing I wanted to do was compare this to GR XRANGE. 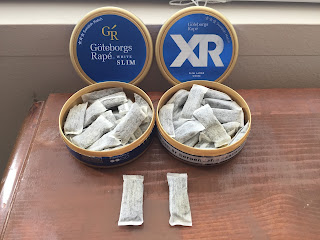 When comparing Göteborg’s XRANGE White Slim and the new Göteborg’s White Slim, I find both products have a can weight of 16.8 grams and contain 21 portions, or 0.8 gram portions. Both products have a nicotine strength of 0.85% or 8.5mg/g, which equals out to about 6.8mg/portion.  Neither product comes in the star formation, which is a bummer, because I hoped the new GR White Slim would.  And looking at the portions, both feel about the same to the touch. Comparing the flavor description of Göteborg's Rapé Slim White from SnusCENTRAL.com and the flavor description of Göteborg's Rapé Slim White from Snus.com, guess what I found?  It's exactly the same.  Both are said to have a "mellow tobacco taste with distinct notes of lavender and juniper, along with hints of oak and citrus."  So, the only difference appears to be the can design, which I like a lot more in the GR White Slim than the GR XRANGE.  It looks a lot classier and it's closer to the traditional GR can.  I have a feeling I'll keep this can around and swap my portions into it from now on. 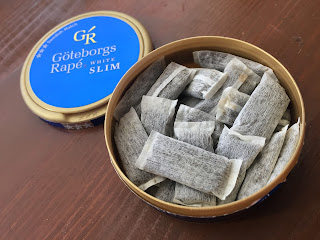 As far as everything else goes, it's exactly the same as Göteborg's Rapé XRANGE Slim White. I don't notice any differences at all. The portions are slim, soft, and feel great in the lip. When you open the can, the aroma that comes through is a present smell of juniper, accompanied by light herbal and floral notes. The taste is the classic GR flavor. The juniper flavor is in the front, with a mild presence of citrus in the background. You’ll also notice the mild herbal and floral notes that mix in and compliment the tastes of juniper and citrus.  The flavor lasts quite a while, which is a benefit of white portions.  With this snus, I can enjoy the flavor for up to an hour, sometimes more if I forget I have a portion in!  The nicotine strength feels to be about the regular level, which is what I enjoy.  All in all, it's basically the exact same product as GR XRANGE, but in a much better looking can.  I'll be interested to see if Swedish Match launches any more products in slim format in Norway.  I would love a General Slim Original Portion for a few reasons.  One, I bet I'd like the can design more than the XRANGE General can.  And two, I am still hoping for a slim General snus with the full General flavor.

If you're in Norway and are a fan of Göteborg's Rapé, definitely give this product a try!
Posted by Chad Jones at 2:32 PM