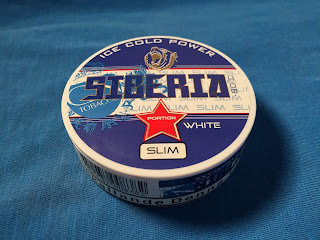 I originally reviewed Siberia Blue when it was in the square tub back in June of 2015. A round can version was released a few months later in November of 2015. Now, I'm not someone who uses a lot of ultra strong/super strong snus. I still review it, however, because a lot of people seem to like it and, let's be honest, I review everything. I've seen people crave stronger and stronger snus as the years have gone by, and Siberia as become the "go to snus" for many people who wants super strong/ultra strong snus. I've also seem slim portions become more and more popular, so it makes sense that GN Tobacco would introduce a slim version of one of their Siberia products.

The product description of Siberia Blue Slim White Portion says, “Siberia Slim is made with same recipe as well known Siberia Portion , we have designed Slim line for those who would like to have Siberian force in more comfortable size, which brings dripping to complete minimum.”  This product weighs in at 20 grams for the can and contains 22 portions, which amounts to 0.9 grams per portion. The total nicotine content is 24mg/g or 2.4% nicotine. That breaks down to about 21.82mg/portion or 2.18%/portion. So, needless to say, this is a super strong snus! 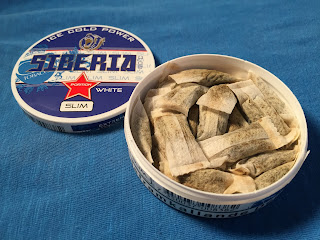 If you've had Siberia Blue before, this product is the exact same but in a slim portion. However, if you haven't had it before, no worries, I will do a full review. When you open the can, the aroma that comes through is a sharp peppermint smell. It stings the nostrils, much like smelling horseradish. It’s a very sharp smell. The portions are white slim portions, and have a soft portion material and feel great in the lip. When you put a portion in the lip you’ll notice a mild cooling sensation and a mild burning sensation. It’s really an interesting feeling! The taste is a very sharp, very focused peppermint taste. The longer you have it in the more you can pick up on a mild tobacco character in the background, as well. The nicotine kick is quite strong; I notice it kick in at about the 5 minute mark.  It is definitely a strong kick!  I’ve been able to keep these portions in for quite a while, and while the cooling/burning sensation may fade, the peppermint flavor lasts quite a while, well past the hour mark!

If you like slim portions that have a mint flavor and a super strong nicotine kick, this one is worth a try!
Posted by Chad Jones at 12:19 PM