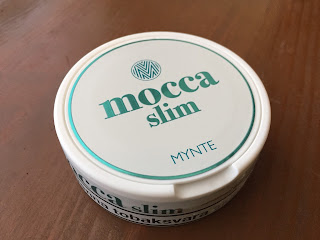 I've been wanting to review this one for a while but could never find it for sale online anywhere. I saw Snus24.com stocking it so I grabbed a can so I could check this one out. I was a little nervous going into this one, however. I reviewed Mocca Mint (White Mini) back in 2009 and it's still one of my least favorite mint snus products. But, I figured this one might be different and I would give it a shot. The flavor description says, "Slim white portions with a pleasant, unobtrusive fit with a cooling peppermint flavor and hints of caramel and vanilla. Lundgren Flexlid™ is simple and practical. Place the used pouches in the expanding catch lid and discover that the time for overcrowded can tops is in the past!”. This is a 16.8 gram can with 24 portions, which means each portion is 0.7 grams. The nicotine content is 8mg/g (0.8%) or 5.6mg/portion. 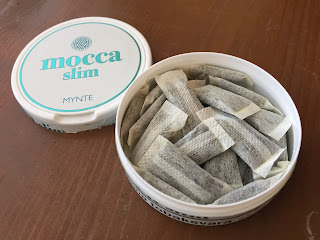 The can design is pretty nice; I like the clean look. I also really like the Lundgren's FlexLid, which is a catch lid that actually expands as you put more used portions into it.  When you open the can, the aroma that comes through is predominantly peppermint with hints of menthol.  The portions are slim white portions and are a little dryer than your average white portion but are still soft to the touch.  When you put a portion in the lip you'll encounter a mild cooling sensation.  When I read the flavor description, my expectations were pretty high.  But, upon using the snus, I found that the flavor wasn't what I expected.  I don't notice any caramel in the taste.  I do notice a predominant taste of peppermint with a hint of menthol.  I found if I really dig into the flavor I can pick out a faint hint of vanilla in hiding in the background, but it's barely noticeable.  The nicotine strength is low and I barely notice it unless I use two portions.  The flavor lasts quite a while; I've found I can keep these portions in for over an hour.

As far as this snus goes, it's a basic mint snus.  It doesn't stand out as great, but it isn't awful, either.  It's probably not something I would order again, because there are better mint products on the market, in my opinion.
Posted by Chad Jones at 8:32 AM