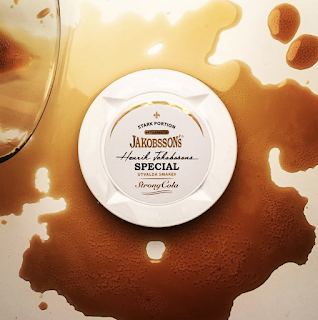 It appears as though Gotlandssnus is gearing up to release a new Jakobsson's product, this one is called Jakobsson's Special: Strong Cola. I really enjoy cola snus, so I'm quite excited to try this one. One of my favorites was Thunder Cola, which was unfortunately discontinued. V2 brought back Offroad Cola in 2016 as a limited summer release, but it is also no longer produced. The only cola flavored snus I know that is still produced is Oden's Kola. So, as you can tell, cola isn't a very well represented flavor in the snus world.  That being said, I can't wait to try this one.  Every manufacturer is different and I'm interested to see Gotlandssnus' take on the cola flavor!

Photo Credit: @Snusers
Posted by Chad Jones at 9:20 AM