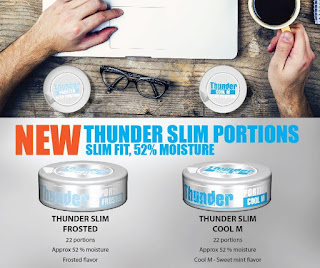 The end of the year is upon us and that means manufacturers are cranking out new releases to end 2016. These are two that I'm quite excited about! We are seeing the release of two new slim original portions from V2 Tobacco. One with the flavor of Frosted and one with the flavor of Cool Mint.  What is particularly exciting about these two is that they are both original portions! Recently, V2 discontinued Thunder Frosted Longer+, which now makes sense given that we are seeing the release of a new Thunder Frosted Slim Original Portion.  I've said for years now that I find slim portions to be the best and most comfortable way to enjoy snus, so it excites me to see more companies making more and more slim portion format snus! 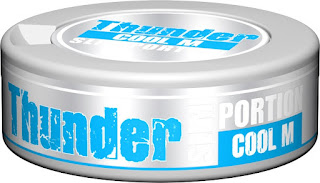 I am a big fan of Thunder Cool Mint. I reviewed Thunder Cool Mint (Slim White Dry) not too long ago and it's become one of my favorite mint snus products. I like it more than Frosted and consider it to be V2's best mint flavor. When it comes to Thunder Cool Mint, the flavor profile of the original portion (regular size) version says, "Thunder Cool Mint Extra Strong Portion snus is a high nicotine, long lasting snus with a smooth taste of peppermint. Fans of Swedish Match's General Mint flavor profile should really enjoy this plus the added nicotine."  I imagine the taste profile will be the same with this one, but in a slim format. 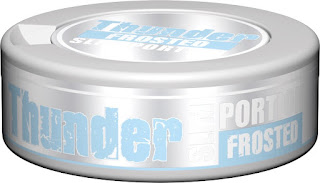 Thunder Frosted is kind of like The Godfather of extra strong mint snus.  When I first started in 2009, it was the first of the extra strong mint products available.  I went through a phase where I used it exclusively for many months, as did many new snus users back in the day.  The flavor profile of the original portion (regular size) version says "One of the most popular flavored extra strong snuses today, Thunder Frosted Extra Strong Portion Snus has a very smooth, long lasting spearmint/tobacco taste and is an extra strong / ekstra sterk / extra stark / snus with 16 mg/g nicotine." Like with Cool M, I imagine the Frosted version will taste the same, but be in a slim portion format.

These should be available soon at your favorite webstore, so keep your eyes open!
Posted by Chad Jones at 6:17 AM