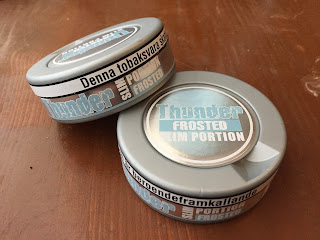 I recently heard from V2 that Thunder Frosted Longer+ was being discontinued. Honestly, I haven't heard of many people using it so it came as no surprise to me. But shortly after, I heard about this product and a new slim portion version of Thunder Cool Mint. Slim portions are becoming very popular in the snus world, so it makes sense that we now see V2 expanding into that area. Thunder Frosted Extra Strong was the 14th Swedish Snus I ever tried and it was one of my first loves. I used it for about 3 months straight before I switched to General full time. But Thunder Frosted has always had a special place in my heart. In the snus world, it's one of the most popular mint snus products on the market. This product isn't for sale yet, but the flavor description for Thunder Frosted Extra Strong (regular size portion) says, "One of the most popular flavored extra strong snuses today, Thunder Frosted Extra Strong Portion Snus has a very smooth, long lasting spearmint/tobacco taste and is an extra strong / ekstra sterk / extra stark / snus with 16 mg/g nicotine."  As far as this product goes, it's virtually identical except it has a new can design and a slimmer portion. 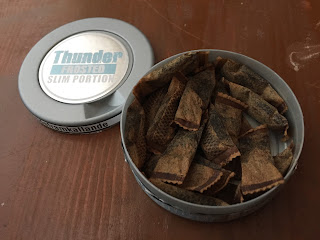 When you open the can, the aroma that comes through is a mildly sweet smell of spearmint.  The portions are quite moist, which is common of many Thunder products.  They are longer and slimmer than your average Thunder snus, and aren't too full.  It's a 19.8 gram can so the portions are a little less than a gram each.  I'm also assuming the nicotine content is the same, 16mg/g like regular Thunder snus.  The portions feel great in the lip and an immediate cooling sensation comes on when you put a portion in, which is common of most mint snus.  The flavor comes on quite quickly and is identical to Thunder Frosted (regular size portion).  There is a very present and lightly sweet taste of spearmint.  I also notice a little bit of tobacco character in the background, as well.

If you're a fan of Thunder Frosted, this is a must try.  The new can design is fantastic, and the portions themselves are much more comfortable in the lip than regular size snus portions!  I'm not sure when these go on sale, but it should be soon!
Posted by Chad Jones at 2:01 PM