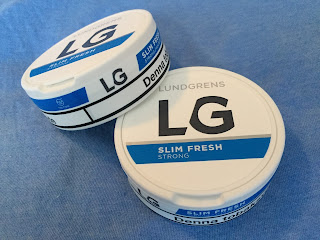 It's been over a year since I've reviewed Lundgren's Slim Fresh White, but it appears that it has become popular enough that Fiedler and Lundgren felt the need to release a strong version of that snus.  The nicotine content of this one is 12mg/g.  This one has a different can design and, surprisingly, is not perforated like the regular strength version of this product. I saw this product for sale at TopSnus.com and thankfully a friend of mine in Europe was able to order and forward a can over to us for review. When it comes to Lundgren's Slim Fresh Strong, the product description says, "White slim in a strong version. Flavour of icy fresh mint and some tobacco. With a new, perforated pouch which allow the taste to get out faster and feel more."  Though the pouches are not perforated, I was glad to see that the FlexLid carried over to this product, as well. 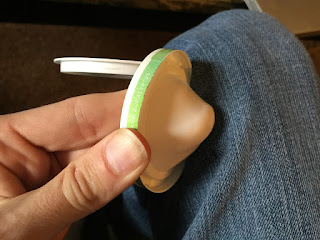 The can pictured to the left is Granit Sensations: Mint Slim (White), but the FlexLid is the same in this product. 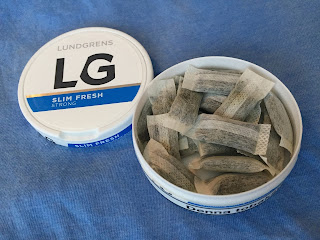 When you open the can, you'll notice that the portions aren't perforated like the regular strength Lundgren's Slim Fresh.  They are, however, slim white portions.  When you open the can, the aroma that comes through seems to be a pairing of sharp peppermint and a gentle hint of menthol.  The tobacco in the portions is rather compact, so I do suggest fluffing these.  The portion feels comfortable and the lip and you'll notice a mild cooling sensation in the lip and throughout your mouth when you put one of these portions in.  The flavor is a mild taste of mint, close to a peppermint flavor, and a gentle pairing of menthol.  The flavors work well together and combine in a way that is not too present, but not too weak.  It is a pretty gentle presence of flavor.  The nicotine strength is stronger than regular Lundgren's Slim Fresh, but it's not going to knock you out by any means if you're used to strong snus.  I notice a nice little kick from it, however.

If you're a fan of the Lundgren's brand and mint snus, I'd suggest giving this one a try.  It's not amazing by any means, but it's a pretty solid tasting product.
Posted by Chad Jones at 2:29 PM