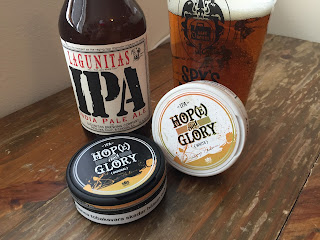 NOTE:  These products have been discontinued and are no longer for sale.

Conny Andersson's latest creation, Hop(e) and Glory IPA Snus has finally arrived and I now have an answer for the eternal question: "Which snus pairs best with an IPA?". This one, of course! I'm a big fan of Conny Andersson and I'm proud to call him a friend. I've been reviewing his products for years. Such as: General Green Harvest (2011), Kardus 2009, Kardus 2010, Kardus 2011, Kardus 2012, Islay Whisky Snus, Crafted Snus: Whisky (Original and White Portion), Crafted Kardus Highland Single Cut, Mellgren's IPA Edition (White Portion) and Mellgren's IPA Single Cut. But this is the one I've been looking forward to most. My favorite style of beer is IPA, and I'm always looking for the perfect snus to pair with it. This is a snus that is good for not only that, but also being an all day type of snus!

The flavor descriptions for Hop(e) and Glory (Original Portion) and Hop(e) and Glory (White Portion) describe this snus as "a daring, new Conny Andersson craft snus, seasoned with classic American hops and the legendary Perique tobacco. This white portion version has flavors of a well-made IPA beer plus herbs, citrus and hints of exotic fruit. Perique tobacco is a unique and rare type of tobacco that comes exclusively from one small swath of land near New Orleans." 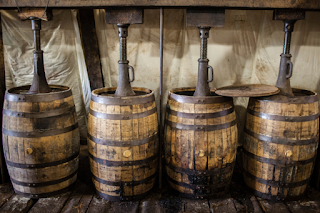 My friend Andreas at Stiff Upper Lip did a great interview with Conny that provided a lot of background information about this snus. Check it out if you haven't seen it yet. From that interview, we learned that for this snus, Conny used Perique tobacco. And like before, 100% lamina. This tobacco is grown in Louisiana by two tobacco farmers. It’s cured, wetted and then piled in bourbon barrels for fermentation. In the old days, you would bury the tobacco for 1 to 1.5 years before digging it up. Now you apply pressure to the tobacco. The photo to the left from a New York Times article shows some of that process. Conny says this tobacco has a “completely magical aroma” and barely smells of tobacco. The aroma is chocolatey, with hints of over-ripe pear and a fruitiness. The tobacco turned out so well that they were about to use 20% of it. 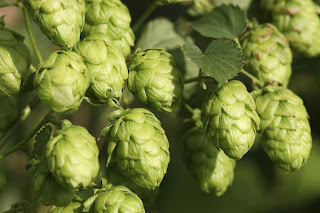 For this snus, Conny says he worked with three different hop oils. This snus is said to have a citrus character, some bitterness, and grapefruit notes like those Conny enjoys in your typical West Coast IPA. It was a long process in the lab, because hop oils aren’t like working with normal flavors. Many ended up too soapy and that’s not what Conny wanted. One of the hop oils is Centinnel, which is less soapy and more clean tasting. He also came across a wild hop that he included in the recipe. That remains a “secret ingredient”, as other manufacturers are apparently experimenting with IPA snus and he wanted to keep that a secret. 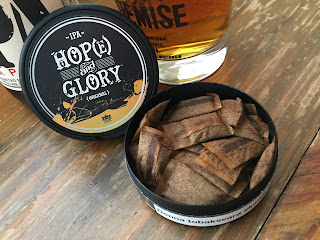 One thing I like about both of these snuses is that the flavors are really complex.  I had to go through a can and a half of each to peg the flavor for my reviews!  At times I notice different flavor notes that I notice at other times, so it took me a little while to write these reviews.

When you open the can, the aroma that comes through is a citrus presence.  It comes across in a fresh, mildly sweet way.  There is a light floral touch and a hint of pepper.  The portions are very moist and feel great in the lip.  The flavor is very complex, that's what I love most about it.  I notice floral notes in the beginning - they come across in a light and airy way.  There's a faint touch of pine, as well.  I pick up herbal notes which are very pleasant and accompanied by a mild hoppiness.  There is a mild citrus/grapefruit taste, it's lightly sweet and semi-tropical.  The tobacco contributes a nice background, a little pepper/spice flavor and a little fruit.  The fruit comes across in a tart way, it reminds me a little of the way Goteborg's Rape Lingon delivers the fruity flavor.  The nicotine feels about regular strength - it isn't in your face, but it is noticable.  Of the two, the original portion was definitely my favorite! 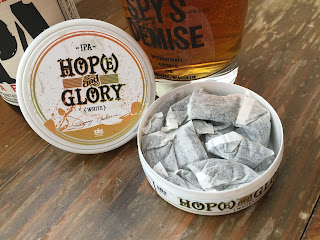 When you open the can, the aroma that comes through is a mild, fresh citrus smell accompanied by light floral notes and a touch of sweetness.  The portions are a little dry, and Conny said that he wants to increase the moisture in the next batch.  The portion material itself is quite soft, but a little more dry than the average white portion.  The taste is a light citrus flavor up front and it comes through as a sweeter and more tropical citrus flavor.  There is a light fruitiness and mild/gentle floral notes.  One thing that is interesting about this one is that the floral notes mellow out and the herbal taste becomes more detectable.  With the herbal flavor I notice a very light hoppiness and a very light touch of pine.  With this one I don't notice much tobacco, and the peppery/spice flavor is milder and more in the background.  The nicotine feels about regular strength, and it delivers a little slower than the original portion with a slower build.  However, it still feels to be regular strength. 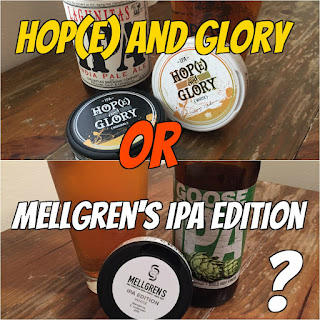 One of the questions people have been asking me is how does this compare to Mellgren's IPA Snus?  For me, I notice a few things.  First, this snus has a much more mellow and well rounded taste.  The flavor comes through much more balanced.  There is less nicotine feeling, which I enjoy.  I'm not someone who uses a lot of stronger snus, so regular strength is what I aim for.  The main difference, for me, is that this is something I could use in my rotation or as an all day snus.  Mellgren's was a good snus, don't get me wrong, but it was an occasional snus.  The flavor was quite bold, so I only used it when we went out for dinner or if I was having a beer.  But the Hop(e) and Glory Snus has a flavor that I could use any time of the day.  People who like General or Goteborg's Rape may enjoy this one.  I definitely suggest trying it out.  If you're a beer fan or not, I think this snus is great and worth grabbing some on your next order.  Great job Conny, and cheers!
Posted by Chad Jones at 3:55 PM