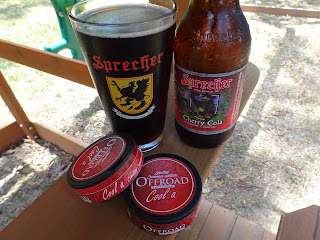 NOTE:  This was a limited edition release for the summer of 2016.

I've always been a fan of Offload Coola Snus. However, it was discontinued not too long ago. Granted, Thunder Coola is still produced, but sometimes I enjoyed that flavor in a white portion with less nicotine. For the summer of 2016, V2 has re-released Offroad Coola as a limited edition with a new can but same great flavor! The product description says, "Limited summer edition 2016: Offroad Coola White Portion Snus brings you great cola snus taste in a slower running white portion and at a regular 8mg/gr of nicotine per portion. Enjoy, cola fans!"  Today, I enjoyed a Cherry Cola from Sprecher Brewery in Milwaukee. If you have access to it, it's a great taste and paired quite well with this snus. 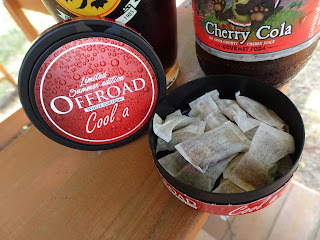 When you open the can, the aroma that comes through is a nice, mild cola smell. There's not a lot of sweetness to it, it's a very gentle aroma. The portions are white and soft to the touch. I do suggest fluffing them, as the tobacco can be clumped in one side of the portion. Upon inserting a portion into the lip, you'll notice a cooling presence that can be felt throughout the lip. Perhaps there is menthol or camphor in the recipe, however I don't actually taste it.  The flavor is much the same as the old Offroad Cola! A mellow cola taste with a nice salt balance.  There isn't much sweetness to it, and I don't taste any tobacco, either.  Just a great cola taste!

This is a limited edition, so once it's gone, it's gone!  If you're a fan of the cola taste, like I am, I'd suggest stocking up and throwing an extra roll or two in your freezer.
Posted by Chad Jones at 10:55 AM