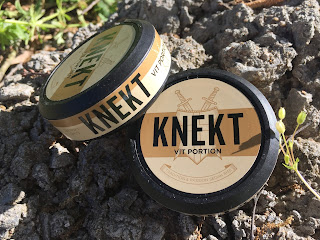 Note:  This is the old review.  Check out the new review of Knekt Original and White Portion - here!

Knekt is truly an ever evolving snus. I originally reviewed it back in 2011, then again in 2015 because the products went through a redesign and I was told the quality had increased. I noticed the flavor to be better, but it still wasn't that great, in my opinion. I spoke with Fiedler and Lundgren earlier this month and was told that with Knekt's third and newest redesign, the product quality/flavor was going to be tweaked yet again! I figured I would review these new/relaunched Knekt snus products in new articles in case anyone wanted to reference my old reviews to compare to the new products. The product description says, "With a genuine, but gentle, taste of tobacco. A dash of bergamot is added to give the right taste of the traditional, Swedish stuff. White portion type (no extra moisture) for ease of use and handling.." 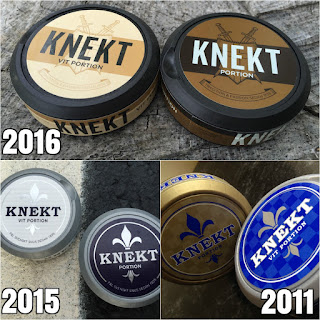 The product design has definitely improved. The 2011 cans were quite cheap and tacky looking, in my opinion. The 2015 redesign looked decent, but still wasn't quite that great of a design. The new look in 2016, however, is great. I feel that the new design works really well with this snus and sticks to the "tobacco centric" flavor theme. I give Fiedler and Lundgren props for the new can design, it looks much better than the 2011 and the 2015 designs for Knekt. 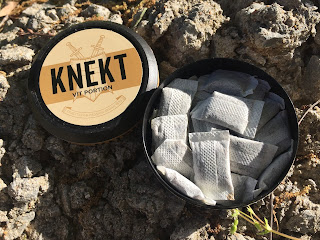 When you open the can, the aroma that comes through is a very light, mild, clear tobacco smell. I don't notice as much smoke in the white portion as I did in the aroma of the original portion. The pouches are pretty soft in the lip, the portion material isn't the most comfortable I've ever encountered but it isn't rough by any means. One thing I like about Knekt White Portion is how long the flavor lasts - it's really quite impressive. I've kept these portions in for up to 2 hours at a time. This snus reminds me of one you old timers might remember, Retro White Portion, an old Fiedler and Lundgren product that was discontinued years ago. The taste is a really mild, gentle tobacco flavor. I don't notice much smoke in the taste like I did in the original portion. I do notice a light sweetness in the background which works really well with the clear tobacco taste. There's also a bit more salt in this one that most other products I've reviewed, but that could be attributed to the salmiak.  All in all, it's a great tasting, simple, tobacco-centric flavor.

I'll say this, the product quality has definitely improved. The can design looks much better. Fiedler and Lundgren did a great job with this product. It's not the best tobacco centric snus on the market, but I would say it's gone from "meh" to enjoyable, and that's quite an accomplishment.
Posted by Chad Jones at 5:05 PM