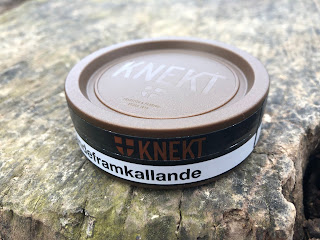 Knekt has always been a personal favorite of mine and, in my opinion, is one of the underrated snus products on the market. I feel like I've reviewed Knekt a million times, because it seems like since it's launch in 2011 it goes through changes every other year or so. But, it's been on the market for 7 years now which is quite impressive, so it appears that Fiedler and Lundgren are happy with the brand. I first reviewed it in 2011 and was rather impressed with it. Fiedler and Lundgren "reformulated it" in 2016 and gave it a new flavor. It's also gone through a number of redesigns which we'll discuss below. Now, in 2018, it's gone through yet another redesign so I figured it was time to re-review it once again.

The flavor description for this product says, "Knekt Loose has a flavorful tobacco taste with balanced smokiness."  It comes in a 35 gram can and has a nicotine content of 8mg/g. 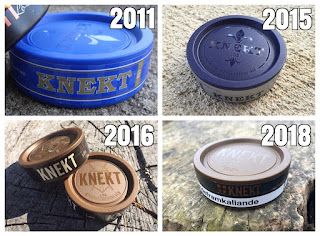 You can see the design changes over the years.  I didn't like the original 2011 design; it had a really cheap look to it.  It was redesigned in 2015, but I wasn't a big fan of that design, either. They redesigned it again in 2016, which gave it a much better look.  That new look went really well with the tobacco centric flavor.  Now it's gone through another redesign in 2018 and has kept the brown color scheme, but a slight change in the design scheme.  I think I prefer the 2016 design in this case, but the 2018 design is still much better than 2011 and 2015. 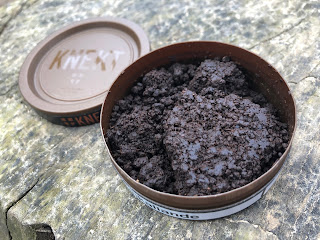 As far as the flavor goes, it hasn't changed since I last had it. When you open the can, the aroma that greets you is a present, mild, earthy tobacco presence and a little smoke. The los itself is pretty easy to work with and handbake. It's also quite soft, moist, and feels great in the lip. The flavor is much like the aroma and is very tobacco centric. I don't really notice any bergamot; the flavor is mostly a clear, gentle, earthy tobacco taste with a hint of smoke. The nicotine strength, on average, feels to be about the regular strength level. The flavor lasts up to about 45 minutes, which is about how long I can keep the loose in for. Some of you old school snusers may remember the old Lucky Strike Los from back in the day, and this one tastes a lot like that one!

This product is great, and in my opinion one of the most underrated products on the market.  If you like the taste of tobacco, this is a must try!
Posted by Chad Jones at 12:44 PM