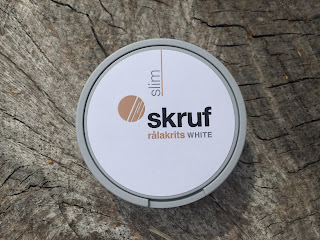 There are a ton of licorice flavored snus products on the market, much like with the mint flavor. When I go into a review for a new licorice product I try to stay optimistic, because most of them taste the same. Thankfully, this is one that surprised me. I was told that Rålakrits means "licorice root" or "raw licorice", which makes sense given what I was told about this product. Skruf said this snus is made the same way that Skruf Mynta is made, where flavoring is added prior to manufacturing. Skruf Mynta uses mint leaves in the recipe, and this one uses licorice root in the recipe. That alone is something that no other licorice snus does, so I was quite hopeful about this flavor. This product is for the Norway market, so unfortunately we won't be able to get it in the US. Also, this product won't be released until May, so there's a little wait before it will be available for the public.

Skruf describes this product as containing "real licorice root, which is dried and finely ground, for a sweet and natural taste of licorice." 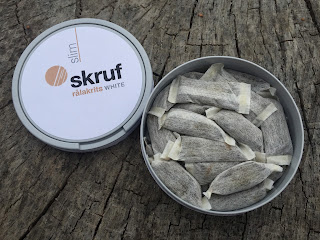 When you open the can, a mellow, gentle earthy licorice smell comes through accompanied by a very light sweetness and a mild smell of tobacco in the background. It's a really interesting smell! The portions are slim and white and a little dryer than the average white portion, but feel comfortable in the lip. The taste that comes through is absolutely delicious. There is a very mellow, mild licorice flavor accompanied by a very light sweetness. It's hard to describe the licorice taste, but the best way I can describe it is "earthy licorice", which I think may be due to the licorice root in the recipe. I don't notice any pepper, and the salt balance is low, so it's not a salty licorice flavor. There's also a really nice mild tobacco character in the background which caught me off guard, but impressed me nonetheless! This is a regular strength snus, so it's not too strong, either. The taste reminds me a little of Catch Licorice (White Portion).

If you're a licorice fan, I would suggest trying this one.  I rank it in the top 5 licorice snus products I've ever tried.
Posted by Chad Jones at 5:05 PM