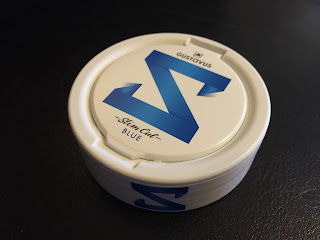 NOTE  This product has been discontinued and is no longer for sale.

Gustavus Slim Cut is a new line from JTI. The name "slim cut" doesn't denote the way the tobacco is cut or ground, it's simply just the brand name. The portions are slim white portions and slightly smaller than your average snus portion.  I've been told these products are designed to compete with XRANGE from Swedish Match, which might explain the big Z on the can.  Perhaps it is to look bold like the big XR on the XRANGE cans.

The flavor description of this one says, "Gustavus Slim Cut Blue is a new affordable Snus with a flavor of juniper, citrus and lavender in the slim format."  There aren't too many juniper flavors on the market, but it seems that every company is adding at least one to their product line.  JTI recently discontinued LD Enbar, so this one may be a replacement for that one, though the tastes are quite different. 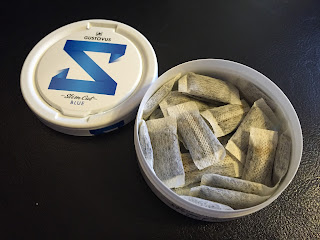 When you open the can you'll notice the portions are slim white portions but slightly smaller than your average snus portion. I would call these mini slim portions if I had to give them a name. Or even "midi", as they do remind me of the discontinued product Mocca Black Maple (Midi), as far as portion size goes.

When you open the can, the aroma that comes through is predominantly juniper and lavender.  Both aromas seem to come through in equal parts.  As far as the taste goes, I don't detect any citrus, but I do pick up a very present taste of juniper, a touch of herbs, and a taste of lavender. The lavender taste, surprisingly, comes through almost in equal parts to the juniper taste.  Lavender isn't a bad thing, but it seems like there's a bit too much of it in this snus.  As far as this snus goes, it's not something I would order again.  Though, I would say if you're a fan of juniper or lavender, it wouldn't hurt to grab a can and try it.  A friend of mine picked this up from Northerner.com and sent me a can, but I've also heard Snus24.com stocks it if you're in the US.
Posted by Chad Jones at 12:47 PM