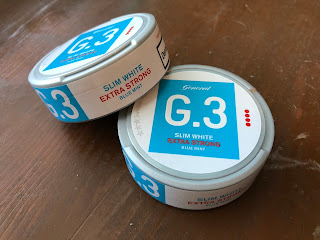 NOTE:  This product has been discontinued and replaced with a White Dry version.  New review, here.

It's been a while since I've had this one, so I felt like revisiting it. This one originally launched in 2015 as a regular strength version, and was discontinued a little while later. However, the extra strong version has stayed around. The flavor description for this one says, "General G.3 Slim White Mint Extra Strong Portion Snus has a mellow and spicy tobacco taste with distinct notes of peppermint, along with hints of cedar and cocoa." This snus comes in a 16.6 gram can with 24 portions for 0.69 grams each. The nicotine content is 18mg/g or 1.8%, which breaks down to 12.45mg/portion. 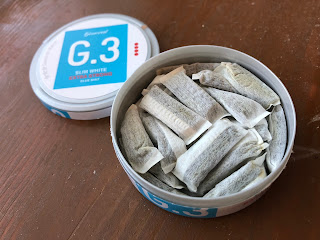 When you open the can, the aroma that comes through is a gentle smell of peppermint with a light sweetness. One thing I like about this product is that the aroma, and the taste, aren’t too sweet. When you put a portion in your lip you’ll notice a mild cooling sensation, which is common of most mint products. The taste is much like the aroma, a mild, straightforward taste of peppermint. It has a touch of sweetness to it, but it’s not too sweet. The nicotine packs a solid kick and feels firmly at that extra strong level. The flavor lasts a good amount of time; I’ve found with this one I can keep it in for an hour to an hour and fifteen minutes.  If you like mint and want something a little stronger, this is definitely worth a try.  It's good compared to others because it has a nice mint flavor but isn't too sweet.
Posted by Chad Jones at 1:23 PM