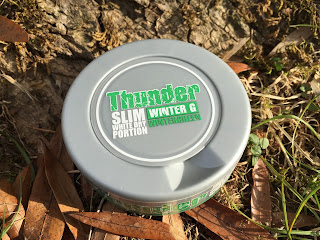 V2 Tobacco is back in action with 2 new product releases to end out 2015. A few months ago, they launched Thunder Frosted (Slim White Dry), which has now launched a whole product line devoted to slim white dry portions. These portions are longer and slimmer in size than regular portions, and have less moisture than your average white portion. Two more products have been added to that line this week - Thunder Cool M (Cool Mint) Slim White Dry and Thunder Winter G (Wintergreen) Slim White Dry. In the past, I reviewed Thunder Wintergreen and Thunder Wintergreen (White Portion).  I've you've read my blog long, you already know that I'm not the biggest fan of wintergreen.  But since I review every snus released, it's my duty to review wintergreen, even if I'm not a fan of it. 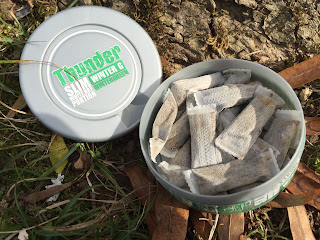 The product description says, "The popular Thunder Wintergreen flavor in a comfortable slim portion format. White dry portions provide a long lasting and refreshing flavor. Thunder Slim White Dry Wintergreen has an extra strong nicotine content of 16 mg/g." When you open the can, you'll notice that the portions are longer and slimmer than your average portion.  They are dryer than your average white portion, but not too dry. When you open the can, an unmistakable aroma of wintergreen comes through, but a little bit milder than the other two Thunder Wintergreen products I've reviewed in the past.  Being a white dry portion, the flavor takes a little longer to develop than your average white portion.  Though the wintergreen flavor starts off quite mild, it never gets too bold or present.  If you've had Thunder Wintergreen White Portion, this one a little milder in the taste department than that one.

For me, as someone who is not a fan of wintergreen, I find this taste to be more agreeable because it isn't as bold.  Though I wouldn't use it again, I can say if you like the wintergreen taste but want a snus that doesn't have too bold of a wintergreen taste, check this one out.
Posted by Chad Jones at 1:16 PM