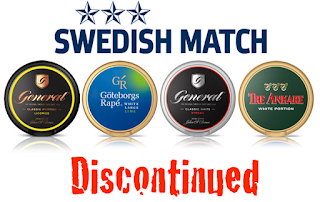 Swedish Match is set to discontinue 4 products in January, 2016.  The only one that really bothers me is General Licorice, I'll be okay without the other 3.

General Classic Licorice - This one is rather unfortunate, as it is my favorite licorice snus. I enjoy their Catch Licorice White Portion, so I suppose I'll switch over to that one.

General Classic White Strong - I figured we would eventually see this one discontinued. With the popularity of General XRANGE Strong White Slim, I assumed this would eventually be delisted.

Tre Ankare White Mini - I hardly ever hear anyone talk about this one, so I'm not surprised that it's being discontinued.

Goteborg’s Rape White Large Lime - This one is a surprise, as there aren't many lime snus flavors out there. I rather enjoyed this one, so it's a bummer to see it go!

If you enjoy these products, buy them while they're in stock.  Once they're gone, they're gone!
Posted by Chad Jones at 2:21 PM