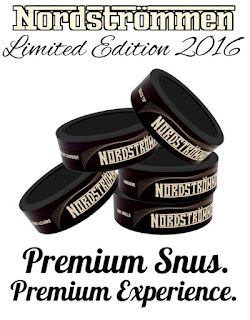 Over the years, V2 Tobacco has released quite a few limited edition releases, but none were as impressive to me as the Nordströmmen line from 2009. The demand for premium snus products has been on the rise, as seen from Swedish Match's Kardus Snus, GN Tobacco's Islay Whisky Snus and AG Snus' Crafted Snus: Whisky.

V2 Tobacco listens to their fans and consumers. In fact, in 2011 I started a movement to bring back Brandy Alexander, which got enough momentum that V2 brought it back in 2012. It proved popular enough that the first batch sold out so quickly that they made a second batch!

With premium snus demand on the rise, I had an idea that the Nordströmmen line should make a return in 2016 with a limited edition product line of portion snus with premium flavors.  Brandy Alexander, rum and more top shelf flavors are possibilities!  Though I'm very biased towards Brandy Alexander.  I know many people who have expressed interest in that flavor, so that's my official suggestion to be included in the limited edition line.  I started a petition, and if you're interested in helping make this happen, let's make our voices heard!

Sign The Petition!
Posted by Chad Jones at 7:38 PM