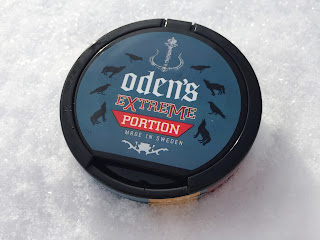 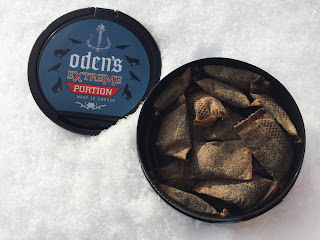 Cold Extreme is the GN equivalent of Thunder Frosted, a snus with a strong nicotine content and a fresh spearmint flavor. A lot of people really liked the taste of Oden's Cold so it only made since that a strong portion version would be coming soon. The taste is very much the same. If you've had Thunder Frosted you'll find the taste is is close but with less sweetness.  There's a mellow taste of spearmint and just a little bit of tobacco in the background.  It also has a nice little tingle/burn in the beginning. Being an Extreme version, it's a stronger version of the regular Cold - and thought it's listed as having 22mg/g of nicotine, I'd say it feels closer to 17 mg/g of nicotine. It has a nice little kick and a very fresh spearmint flavor.  If you like a spearmint snus flavor, but want something that is a little less sweet, this would be a good one to check out!
Posted by Chad Jones at 7:18 AM