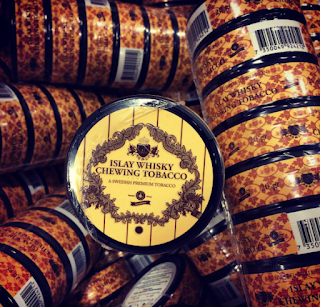 Check out our full review of this product - here!

Due to the ridiculousness of the EU snus ban, companies are able to release a product made the same was as snus and call it "chewing tobacco" to get around those ridiculous EU bans. It is almost humorous to me that the exact same product can be legally sold under a different name, but that's beside the point.  The only difference I've observed is that in most cases the los tobacco or tobacco inside the pouch has a little different texture/grind/consistency/appearance - but it is made the same as snus, has the same health benefits, and the taste is the same as snus.

GN Tobacco appears to be jumping into this tradition and releasing a version of their popular Islay Whisky Snus as chewing tobacco, called simply Islay Whisky Chewing Tobacco.  The product is marketed for the Switzerland market.  One thing that is interesting is that these cans appear to be plastic, as opposed to the regular metal tins they've used in the past.  As soon as I can get ahold of some cans I'll post a review of this new snus from GN Tobacco.
Posted by Chad Jones at 5:53 PM