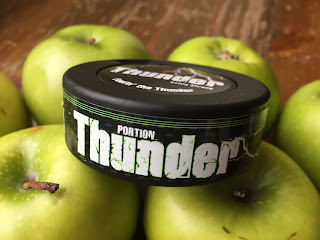 In 2014, V2 Tobacco released the 2014 Thunder Limited Edition, which contained flavors such as Lemon, Melon, Eucalyptus, Apple and Caramel Vanilla. What V2 Tobacco has been doing lately is seeing which products of their limited editions are popular enough to add to full time production, and which products didn't sell well enough to keep around. From the 2014 series, V2 decided to keep Apple and Melon. The product description says it has a "fresh and crisp taste of apple and a kick of nicotine." 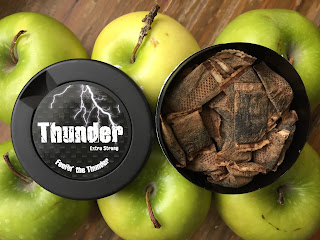 V2 has mastered how an apple snus should taste - they do it perfectly. From their Long Cut Apple (discontinued) to the new Offroad Apple White Mini, they've definitely found the way an apple snus should taste. If you've had one of those two, this is very much the same. An aroma of fresh apple with a little nutty smell. That carries over to the great taste of this snus. It has a very bold taste of apple - it's a tad sweet, but not overbearingly sweet. The apple flavor is very natural and has a little nutty hint to it and a mild tobacco character in the background. This one is really good.  If you dig the taste of apple, this is a must try!
Posted by Chad Jones at 10:38 AM