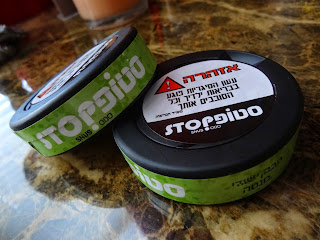 I've been wanting to write about this stuff for quite a while. Ever since I heard about it, I was instantly intrigued. Thanks to a friend I met on /r/snus on Reddit.com, "adventurous_moose", I got a few cans in the mail to try.

If you aren't familiar with it or haven't heard of it, Stop Minta White Mini Ultra Dry is a product sold by SnusLine.com. Though I don't know who makes it, I see that they use V2 Tobacco cans. When I pulled the label off the catch lid I saw the "Snus" text that is common of other V2 products. 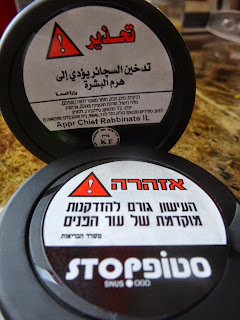 The rest of the text on the can and the warning labels were difficult for me to read, so I reached out to a friend of mine from Instagram, "TheOnionGod", who I know speaks the language.  He was able to give me a basic translation and a little run down on the labels/text.

He told me the warning label is the standard tobacco warning label in Israel, it says, “Cigarette smoke harms the health of your children and those around you.”  Why there is a cigarette smoke warning on a smokeless tobacco product, I don't know.  The part on the green label says, “Swedish Mint Tobacco”. The warnings come in both Hebrew and Arabic, as tobacco companies in Israel are apparently required to print both. 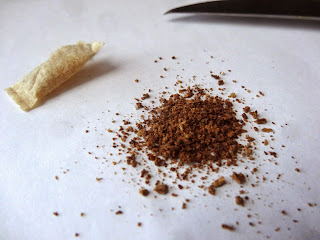 The next thing I wanted to do was examine the tobacco itself.  When I opened the can and felt the portions, they were very hard and packed, and very dry.  So I cut a portion open to remove the tobacco inside and examine it.

It looks a lot like what American "snus" looks like when you examine it.  It is very dry and resembles cigarette tobacco. 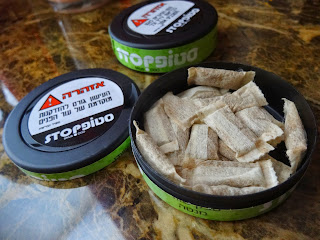 As far as the snus itself goes, it's not that great. The aroma has this weird, musty quality to it with a little mint in the background. The taste reminds me of a snus I reviewed in 2009 that I didn't like very much, Mocca Mini Mint. If you've ever licked a stamp, that weird aftertaste you have afterwards - that's what this tastes like. It's just an off-putting, musty, muted mint flavor.

I'm glad I got to try it so I can say I experienced it, but it's nothing I'd want to order or try again.
Posted by Chad Jones at 2:44 PM