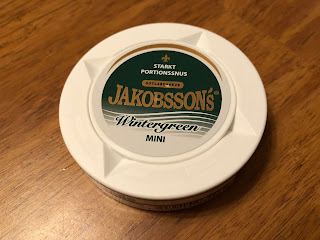 I generally don't talk much about mini portions because I honestly don't use them that often. However, I realize lots of people do enjoy them. I actually quit smoking with a mini portion, General Mini Mint. So, since people do use these, I figured I would give this one a try. Now, when I do mini portions, I personally use two. But that isn't to say you can't enjoy just one. Also, I know men who use mini portions, so don't let the size run you off. If you're a guy and enjoy using these, more power to you! The flavor description for this product says, "This small pouch has the taste of wintergreen with elements of mint and sweetness. Wintergreen is known for its strong and minty flavour." This product comes in a 7 gram can with 20 portions for 0.35 gram portions. The nicotine content is 14mg/g (1.4%), which breaks down to 4.90mg/portion. 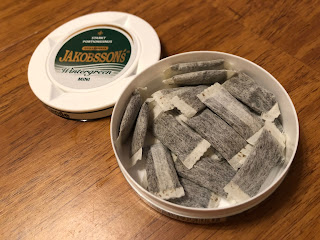 If you've had Jakobsson's Wintergreen (Strong) before, this one is a lot like that one, but more mild in taste and not as strong. In my opinion, Jakobsson's Wintergreen is one of the better products on the market with a wintergreen flavor, and I'm not a fan of wintergreen.  When you open the can, the aroma that greets you is a mild, gentle, slightly sweet smell of wintergreen.  The portions are soft, and comfortable in the lip.  They're slim in size, and light in weight.  The taste is very much wintergreen, but pretty mild.  There's just a little sweetness to it, as well.  The nicotine strength when I have two in feels to be about regular strength, so if you're someone who uses mini portions I imagine you'll feel a solid kick from this one.  The flavor lasts a good amount of time, as well.  I've found I can keep these in for up to an hour!

If you're someone who likes the wintergreen taste and wants a smaller portion, this is worth a try!
Posted by Chad Jones at 2:32 PM