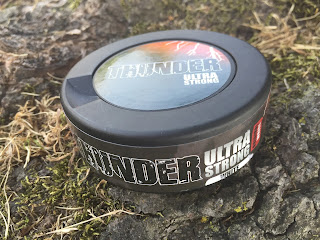 The Thunder Ultra line has added a new snus to it's product lineup, this time a a white portion version of Thunder Ultra Original. BuySnus describes it as, "New Thunder WHITE Ultra Original Portion - the strongest snus ever made by V2 with only the taste of pure Tobacco! Now as a white portion snus - clearly not for the faint of heart..." That description is very true. In the battle for strongest snus, two companies have been able to stand apart from others, Swedish Match and V2. Those two companies, in all my years of doing this, have been able to produce snus that has the highest free nicotine (usable nicotine) levels of their snus. That means that this snus is close to it's total nicotine content. It's one thing to say your snus is 17mg/g-22mg/g of nicotine, but to actually deliver that is another. And V2 and Swedish Match are the two companies who do that the best. 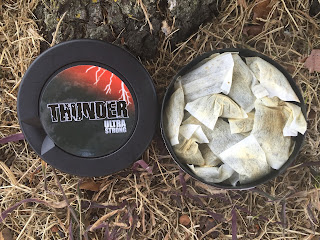 That being said, I use mostly regular strength portions, so this snus kicked my teeth in. It's strong. The aroma has a slight sweetness to it, and a bold tobacco/peppery smell. The portions are white, with a little moisture coming through. They're very soft and comfortable in the lip. The flavor is much like Thunder Ultra Original. Not much citrus to speak of, but a bold tobacco taste, with a nice peppery bite. The pepper isn't as present as say, Oden's Extreme, but it is there and it is present. The nicotine kick takes a bit longer to come on than the original portion, but once it does come on - it kicks like a mule. If you're a fan of strong snuses, this is right up your alley.
Posted by Chad Jones at 12:25 PM