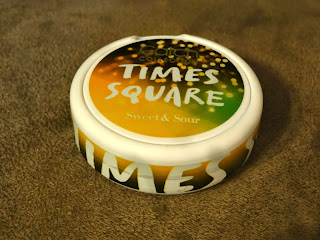 Swedish Match seems to be sticking with the New York theme for the Catch Collection. It's been going on since 2012, so this is the second year to see this. In February 2012, we had Lafayette Street (Spearmint), in May 2012, we had Spring Street (Apple Cinnamon), in January 2013, we had Madison Avenue (Rich Mint) and in August 2013, we had Union Square (Sour Mint).  Now comes Times Square (Sweet & Sour), finally a non mint. The flavor is described as, "Catch Collection Times Square - mild tobacco character with pear flavor and a touch of spice and ginger". 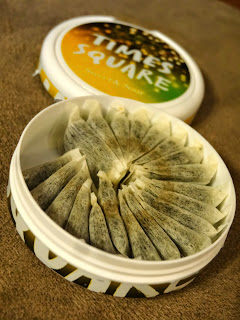 When you open the can, a fresh aroma of pear comes through to greet you. The pear flavor is very present, it's up front and noticable as soon as you put the snus in. There is a little hint of ginger in the back, and an eastern spice/herbal flavor that's mixed in, but in a very small amount. This is one that I could get behind them making a large version of, because it's unlike any other snus I've ever tasted before. What's interesting about this one, as well, is that it's not very sweet. Most companies who make a fruit flavored snus tend to make it a tad on the sweet side, but this one sticks to the natural flavor of the fruit and doesn't add a bunch of sugar. Which in my opinion is a good thing. I had to double up on the portions, since they're mini - so if you're not into mini portions, I would advise doing that. If you're looking for something different to try, this is a good one to check out!
Posted by Chad Jones at 6:46 AM