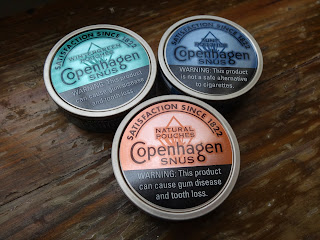 These products were part of a limited test market in 2014 and were discontinued shortly after.  They are no longer for sale.

In March, 2011, I previewed Copenhagen Snus. I never imagined this product would actually come to light and be real, but we recently previewed it again based on some photos sent to us from a user on Instagram. It's easy to fake pictures, so I asked this user to send me some. He got me in touch with his contact, I paid for some for myself and Nash and it showed up today. So yes, I can say that Copenhagen Snus is real. One thing you'll notice about this article is that I'm not going to say "snus" like I do with most American "snuses" when referring to this product (I'll still say it referring to other products), because this is the closest effort to Swedish Snus I've seen in an American product to date. It's not on the same level as Swedish Snus by any means, but as far as American "snus", this snus is leaps and bounds ahead of what we've seen so far in the US. 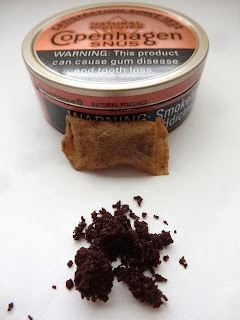 The tobacco itself is much more moist than any American "snus" product I've seen to date.  The pouches, as you can see by the photo, aren't huge, like they've been doing in the past with American "snus" products.  This snus seems to have taken notes from what we didn't like about other American "snus" products and make this snus product.  If I had to guess, I'd say 40%-50% moisture content.  Also, if you remember from my preview, the USST/Altria help line wouldn't tell me anything more than the product is a "pasteurized product", but wouldn't tell me any more about tobacco selection, curing or additives - so until I know more about that I can't vouch for how much safer this product is than dip/cigarettes/etc, but what I do know is that it is pasteurized making it a spit free product, and one that is safe to swallow your saliva when using.

You'll have to click this photo to blow it up and get a good look at it, but this is a comparison of Swedish Snus, all American "snus" products to date, and Copenhagen Snus added at the end. You'll obviously be able to tell that Copenhagen Snus is the closest in moisture content to Swedish Snus. From Left, General White Portion, Camel "SNUS" Robust, Marlboro "Snus" Original (2011), Skoal "Snus" Smooth Mint, and Skoal Bandits (Wintergreen). The Swedish Snus General White Portion is very moist and ground very well - it's a traditional snus. The Camel "SNUS" sits at around 30% moisture content and is very dry - looks almost like cigarette tobacco. The Marlboro "Snus" Original is also very dry, I want to say between 20%-25% or thereabouts in the moisture department, but also very dry - looking much like cigarette tobacco again. The Skoal "Snus" is more interesting. Skoal "Snus" is around 30%-40% moisture content by my estimation. The tobacco is also more finely ground. The Bandits (not a snus) looks like traditional dip tobacco, very moist and pinchable, probably in the 50% moisture content range or so. Don't let this confuse you. The Skoal "Snus" tobacco itself looks much like other American "Snus" tobacco, it's just more moist. The Bandits tobacco looks much like American dip tobacco. The Copenhagen Snus also is very akin to fine cut American dip, but it's getting closer to what we would expect an American Snus to actually look/feel like. 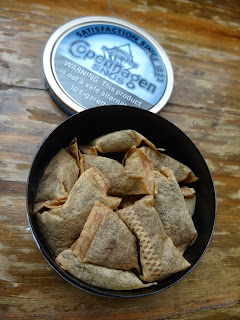 Copenhagen Mint Snus blows other American Mint "snus" out of the water. I'm not a big mint snus user, but I can appreciate the taste and what they're trying to do here. The aroma is a peppermint smell, with little hints of natural mint oil. The flavor is a sharp peppermint taste, it has a nice little bite and tingle to it. The flavor is very much a peppermint flavor, but it's not overbearingly or sickingly sweet like is common of American "snus" products. This snus flavor is very close to what you would expect from a Swedish Snus with a mint flavor.  The closest Swedish Snus I can think of that this taste is Jakobsson's Mint Strong. 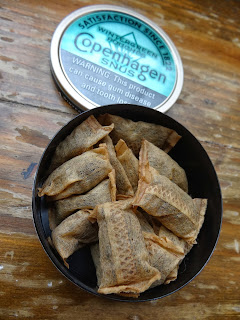 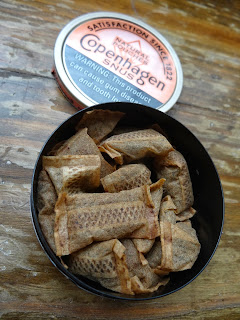 This is the one I've been waiting to try. A natural/tobacco flavored snus isn't something that Americans have mastered yet. Camel's Robust, Marlboro's "tobacco" flavored "snus" - these products have been so infused with sugar that you can almost barely even taste the tobacco. This one is a BIG step in the right direction. It isn't as bold as you'd expect from a Grov or Ettan (Swedish Snus), and it doesn't taste much like a "natural" dip. It's unique, in it's taste. The aroma is a very flat, or muted tobacco smell. The taste is much like an off brand snus would taste like - a Kaliber, or something like that. The flavor is a straightforward tobacco taste, it's not sweet at all, but it's not a very bold flavor by any means.  I can say it's definitely a step in the right direction, as far as American snus goes.

In closing, I will say these snuses are the best American snus products out there.  I still prefer Swedish Snus, the flavors of Swedish Snus are leaps and bounds ahead of these, but as far as the American snus scene goes, these are way ahead of Camel, Marlboro and Skoal.  It seems like USST/Altria was actually taking notes from what a snus should actually be and implemented them into this snus.  This isn't something I'm going to go out and buy, but if you're a lover of any kind of tobacco, you should definitely try these.  Right now they're in a test market in Texas, but I definitely expect them to grow out of that and be in more locations, because these are much better than other American Snus products available today.

There is also a video review up at our YouTube page - click here to check it out!
Posted by Chad Jones at 1:44 PM