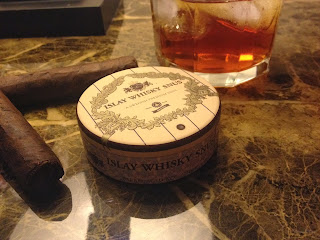 I first met Conny Andersson in 2010 when I took a trip to Sweden to tour Swedish Match's factories. We hung out again in New York City in 2012 for another Snus Summit and shortly after that he left Swedish Match. Conny went on to work with GN Tobacco, maker of Oden's Extreme and various other Oden's and Olde Ving products and started down the path of making his own small-batch premium snus.  Julls from SnusCENTRAL once remarked that Conny has a "PHD in Taste", and if you've ever tried Kardus and tasted any of his work, you know how true that statement is.  Recently I did a preview of Islay Whiskey Snus, you know how excited I am about it. This is a snus that has been in the works since 2012. It's made of tobacco from Nicaragua, Pennsylvania, South Africa and Ghana and paired with whiskey of Islay, the southernmost island of the Inner Hebrides of Scotland. 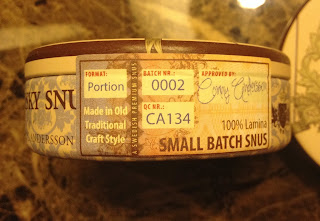 The tobacco has been barrel aged (in the actual whiskey casks from Scotland) to develop it's maximum flavor! The tobacco is 100% Lamina, meaning no filler, only pure tobacco. The snus is also produced differently, "We use the ancient traditions, we sweat the tobacco in the fire room instead to pasteurize it. Pasteurization is an effective and quick process and has advantages in mass production. The time consuming perspiration was the way that all Swedish snuff was produced until 1981. When one sweats tobacco and does not stress it you get a cleaner and clearer tobacco flavor in the finished snus." The cans are all numbered, which stresses further how limited this snus is and the effort that went into the details of producing a small batch, to ensure the utmost quality. 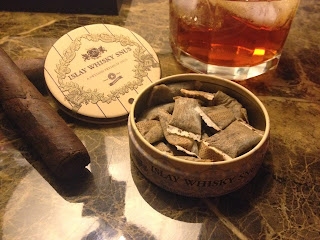 The snus itself is an original portion. It's not as wet as most original portions, but not as dry as a white portion. When you open a can, the aroma that comes through is a very bold, dark and rich earthy tobacco aroma with hints of smokey whiskey. In the past, I reviewed Probe Whiskey from Swedish Match, and if you're a fan of that, this snus is about 10 steps up from that in terms of taste. Whereas that snus had a sweeter whiskey taste, this one doesn't. The flavor is a bold, rich, dark and pure tobacco flavor with hints of whiskey and smoke and a mellow salt balance. The whiskey isn't too strong or overbearing, but it exists and melds gently with the tobacco to provide a very premium and exquisite taste. All in all, it is a fabulous snus. It's up there in the top 10 most flavorful snuses I've had in the past almost 5 years I've been reviewing snus. As of right now, it's only available in these stores in Sweden, and I'm not sure if any webstores are going to be picking it up, though it would seem likely that it'll happen eventually. It's priced at around 10$ a can in Sweden, but it's worth every penny. Without Kardus this year, it's great to have a premium snus available that will take it's place. Conny did a great job on this snus, and I'm thrilled to finally be able to enjoy it. 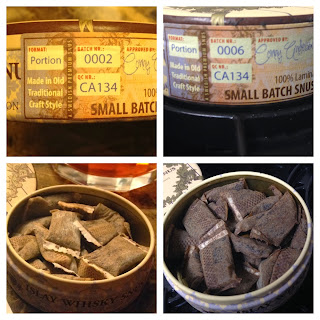 Update 25 February 2014: A second batch of Islay Whisky Snus has been released, or #6, as the can says. Conny tweaked the recipe a little bit to make this more up to his standards. The portions, as you can tell by the new can on the right, are much more moist. The flavor has changed a tad, with the whiskey flavor not being as bold, but the smoke and tobacco flavor seems to be much more bold and in front than before. I thought Islay Whisky Snus was perfect as it was, but this new batch is still just as tasty as the original batch!

Keep an eye out for it, I think it's shipping now, so if your cans say #6, you're into the new batch.  Or you can just tell by how much darker the portions are, it's pretty apparent.
Posted by Chad Jones at 6:50 PM