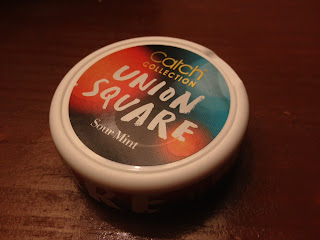 Catch Collection/Union Square (Sour Mint) is the latest in the Catch Collection line from Swedish Match with New York themed names. Following Lafayette Street, Spring Street, and Madison Avenue, BuySnus describes Union Square as "UNION SQUARE Sour Mint by Catch Collection! UNION SQUARE Sour Mint is the latest edition from Catch Collection and it has a mild Tobacco blend with a delicious sweet and sour flavor mix, of grapefruit and fresh mint." If you're not familiar with New York, Union Square is "...an important and historic intersection in Manhattan in New York City, New York, located where Broadway and the former Bowery Road – now Fourth Avenue – came together in the early 19th century; its name celebrates neither the Federal union of the United States nor labor unions but rather denotes that "here was the union of the two principal thoroughfares of the island"." 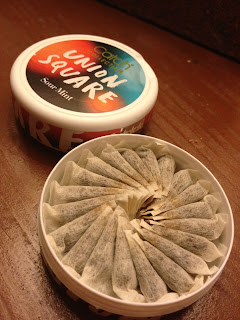 The grapefruit aroma is very present when you open the can, and the hints of mint are very subtle in the background. The taste is a pleasant blend of sweet and sour, the grapefruit and the mint mingling very well in a unique flavor. I'm not a big fan of mint, but this one is a very different take on mint snus. I would definitely approve of this being released in a regular size portion.
Posted by Chad Jones at 8:17 PM