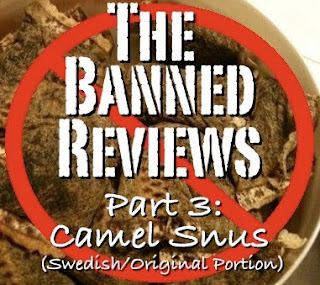 Part 3 in our "Banned Reviews" series may be a bit confusing, but I will clear up everything soon. This review is for the Swedish Camel Snus made by JTI Sweden. As you know, we recently reviewed Gustavus and Lucky Strike (White Portion), two banned snuses that can't be brought into the US due to FDA guidelienes, brand restrictions, or both. As I've said in the last two reviews, this isn't just me reviewing stuff most of my readers can't get to be an asshole. We also have a large following in other countries, so this may be helpful to them as well. In part, it's my way to write about snus that I really love, but may not be able to have again, and to help those in other countries who may be thinking about trying this snus for the first time. 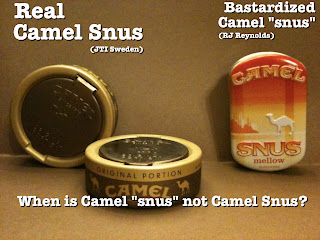 Now, we need to clarify something first. When is Camel "snus" not Camel Snus? There are two different Camel snus brands, due to the fact that the Camel name is not exclusive to RJ Reynolds. RJR produced Camel "snus", which is a bastardized American knock-off of REAL snus. If you're in another country and this is the first you're hearing about it, I've reviewed Camel "snus" Mellow, and Camel "snus" Robust and Winterchill, some of the varieties in the American Camel "snus" line. JTI Sweden produces a real, traditional snus with the Camel name which has a great flavor and provides a more traditional approach and experience to that of the terrible American product. 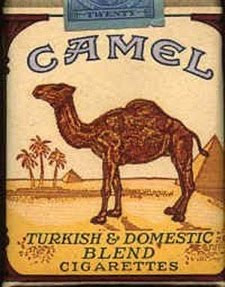 One thing I want to mention is that despite the fact that Lucky Strike snus (a snus with a cigarette counterpart) has the toasted flavor that the cigarette brand is known for - the Swedish Camel snus does not attempt to bring the flavor of it's cigarette counterpart into their snus. If you're familiar with Camel cigarettes, they're known for their Turkish tobacco and exotic flavor. That flavor wasn't brought into the Swedish Camel snus, instead it has a much more traditional flavor. As much as I would have liked to see this in a snus, I'm still pleased with JTI's version of Camel Snus. It is a very traditional snus, and a much deserved slap to RJ Reynold's, as if to say "Hey, RJR! This is how you make a real snus!" Now, on to the review of Swedish Camel Snus. 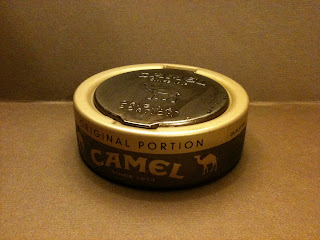 The can is really cool. It has a dark brown color with a gold band around the top and the Camel logo and "Since 1909" on the top of the can. Since RJR doesn't have the exclusive rights to the Camel name, JTI has used it in their version of Camel Snus to deliver Camel snus the way it SHOULD be. Not as an overly sweetened product, but as a traditional flavored snus that delivers the Swedish snus experience. When you open the can the aroma that comes through is a very citrusy aroma with a rich tobacco smell mixed in. For some reason (and I know this isn't an ingredient), every time I open a can of Swedish Camel Snus I smell chocolate. For some reason, I detected this with LD White Portion, another JTI Sweden snus. 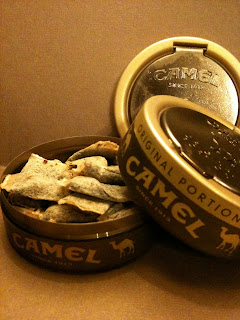 This review is on the Original Portion, which I prefer to the White Portion. Much like with Gustavus, there are a few snuses I like in Original Portion, and it's mainly if they can provide a comfortable portion without a lot of drip/moisture - which this snus does. Most OP's are too moist for my liking, but I find this one to have a great balance of a moist and comfortable portion without dripping. The taste is very traditional. In all senses of the word, it is a Swedish Snus. A very mellow citrus flavor with notes of pepper, hints of salt, but with a slight sweetness in the background. Not a floral sweetness, but something in the citrus. It's a really great snus if you like traditional flavored snuses. If you're in a country that sells this particular snus, I suggest you try it, especially if you like traditional flavored snus. It's a really great product!

Now, to clarify why this can't be sold into the US, it was once said like this, which is probably the best explanation of it. "In the case of Camel Snus, two separate companies are licensed brandowners of the product, and they divide the world between them. Where Camel is owned by RJR, JTI is not allowed to sell any Camel-branded tobacco products, and vice-versa. In the case of Lucky Strike, the non-North American company is BAT, and RJR holds the rights to this brand name in the USA. Interestingly enough, BAT is a shareholder in RJR."
Posted by Chad Jones at 9:50 AM