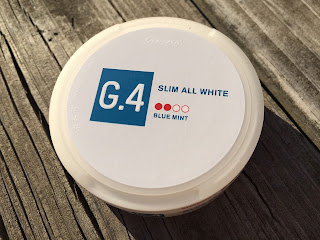 The "white snus" category has become all the rage lately. It's interesting, because when I reviewed Epok Breeze, Winnington's first white snus release, I wasn't sure if it was going to stick around. But sure enough, Winnington released more and more white products and people seemed to really dig them. Swedish Match would eventually release Zyn NT, which is a dryer product containing nicotine salts and no tobacco. Shortly after that, Swedish Match would release General Omni in 2016, which was also a dryer white product. But, unlike Zyn NT, Omni would contain a "smaller share" of tobacco. Now, Swedish Match is going all in with the white tobacco product and releasing General G.4 All White, which is a product much more similar to Epok.  It seems that the white tobacco category is here to stay. 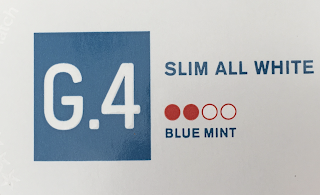 The fact that it's called G.4 shows how serious Swedish Match is about it. G4 means Generation 4. Swedish Match considers General Los to be Generation 1, which came in 1866. Then, the portion format in 1977 is considered Generation 2. The recent G3 line is considered the third generation, which was intended to be a perfect snus - Extra Strong, Slim Fit, Long Lasting, Soft Fit, Minimal Drip.  Now we have this new product called G4.  Perhaps Swedish Match considers white tobacco to be the future, as it looks to be their fourth generation, in terms of progression of snus itself. 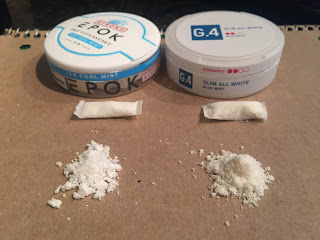 This is a comparison between Epok Snus and General G.4.  You can see the portions look very much the same, as does the tobacco inside.  The Epok tobacco is a little more white, and the G4 tobacco is a little more fine. When I spoke with Swedish Match I was told the flavor profile of this snus is “mint”. G4 Blue Mint comes in normal strength, but is said to have a more instant nicotine delivery than traditional snus. G4 contains 24 portions in a 19.2 gram can, which breaks down to 0.8 gram portions. Assuming “regular strength” means 8mg/g, that’s 6.4mg/portion. They told me the process used to produce this snus is a trade secret and is patent pending. They said they’re using white tobacco which is added along with natural fibers. They say the product is white before, during, and after use. 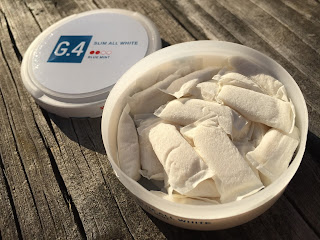 When you open the can, the aroma that comes through is a gentle mint aroma.  I pick up peppermint, mostly, but it seems to have some natural mint in the background.  The portions are very soft to the touch and very comfortable in the lip.  You'll also experience the familiar cooling sensation in the lip when you put a portion in, which is common of the mint snus format.  As far as the flavor goes, it reminds me of mint chewing gum.  The flavor is very gentle and mildly sweet.  I pick up peppermint as well as natural mint in the taste profile, however at times I can almost detect a very faint hint of spearmint in the background.  The taste of this snus lasts about 45 minutes.  When it comes to the nicotine, it feels to be about regular strength.  I can feel it a little quicker than the average snus product, but it's not instant by any means.

As far as the white snus format goes, it's a pretty decent product.   It's interesting that Epok made such an impact on the market that Swedish Match released this product, as well.  I'm interested to see if Swedish Match releases more of these in the future, or if other companies do the same.