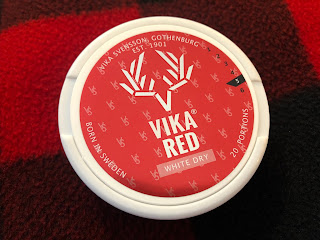 Vika is a new line of snus and nicotine pouches I recently discovered on Snus24.com.  From what I can tell, the company in Sweden that makes them is known as Vika Svensson.  On their website, I read that she was born in Stockholm in 1879.  She got an engineering degree from the University of Sweden.  In 1911, she opened a coffee house in Gothenburg where lots of rich and famous people met.  She sold snus to her clientele there, where she earned the nickname "Snus-Vika".  I'm assuming this product line is made in her honor.  This one is a snus product, and the flavor description says, "The Vika Red has a hint of a frozen mint aroma which brings the chill factor and a big amount of refreshing taste".  Each can weighs 13g, and has 20 portions, for 0.65g portions.  The nicotine content is 23mg/g (2.3%), or 14.95mg/portion. 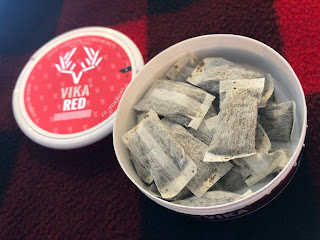 When you open the can, the aroma of this one is really interesting.  It's a mint snus, but it's not super mint.  A present smell of peppermint comes through, but it's not super sharp, nor is it super sweet.  It has a tea-like presence to it, along with a mild tobacco character.  The portions are slim, but not super slim.  They're soft, and not super dry.  There's also not an overbearing cooling presence, which is different from what most mint products have.  The flavor is really intriguing.  It has a mild mint taste, but also has a light earthy tobacco base and a tea-like character.  The mint is not bold by any means, and it's really well balanced.  The nicotine strength is around the strong to extra strong level.  The flavor lasts about an hour, on average.
Rating and Final Thoughts
I rated this one at 3.42 out of 5, which may sound low, but it took dings for me due to the mouthfeel and the strength.  But in terms of aroma and flavor, it definitely was impressive.  It's a mint snus, but it's not super minty, which I like.  It's very well balanced, and I like how the other flavor components are there along with the mint, and the mint doesn't overtake everything.  It definitely was a surprising one.  Whether you like mint or don't like mint, it's one I'd suggest trying out if you're an extra strong snus fan!