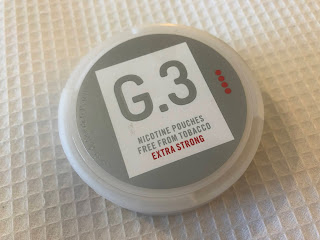 Swedish Match has released another nicotine pouch in one of the main lines, this one falling in the G3 lineup.  They recently launched one in the XRANGE series.  If you read my review of that one, you'll recall I wasn't the biggest fan of it.  Going into this one, I was curious if this would be a stronger version of that one, or a brand new flavor.  The description for this one I read on SnusMe.com says it has a "taste of bergamot and licorice".  Each can weighs 19.2g and has 24 portions, weighing in at 0.8g each.  The nicotine content is said to be 13mg/portion.  Doing some backward-math, that would be around 16.25mg/g in total. 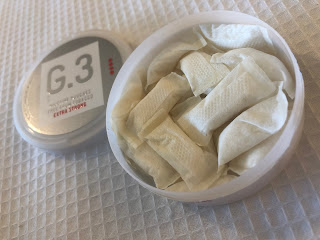 Spoiler alert, it's basically a stronger version of the XR one.  So, obviously you can tell I'm probably not going to be that big of a fan of this one.  When you open the can, it has an odd aroma to it.  It's a smoky/peppery licorice mixed with a little bergamot.  The portions are soft, slim, and semi-moist.  The flavor is very much like the aroma.  It's an odd, smoky licorice flavor along with tones of pepper and bergamot.  Like I said in the last review, it is oddly reminiscent of left-over, room temperature Jägermeister from the night before.  The nicotine feels to be between strong and extra strong and has more kick to it than the XR version.  The flavor, on average, lasts about 40-50 minutes.
Rating and Final Thoughts
So, it ended up at 3.08/5 for me.  It's a solid product in terms of quality.  It has a nice can, quality pouches, a good nicotine release, and a long lasting flavor.  However, in terms of aroma and flavor it's not that good.  I don't know what Swedish Match was trying to accomplish with this one, but it just doesn't taste that great.  To cycle back, leftover, room temperature Jägermeister from the night before.  Now, if you like that sort of thing, you may dig this one.  But at the end of the day, it just wasn't for me.