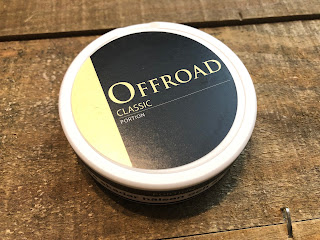 Back in early 2020, V2 Tobacco discontinued two products:  Offroad Original Portion and Phantom Classic Portion.  After that happened, they launched this one:  Offroad Classic (Original Portion).  When I talked to V2 about it, they told me this one was a merging of that product!  The last time I had it, it came in a black can.  However, Swedish Match (owner of V2 Tobacco), has been phasing out black cans due to them not being recyclable, so it seems this one has changed to a white can.  I think gold would have looked better, but it is what it is.  The flavor description of this one says, "A taste of bergamot and citrus".  Each can weighs 18g and has 20 portions, for 0.9g portions.  The nicotine strength is 8mg/g (0.8%), or 7.2mg/portion. 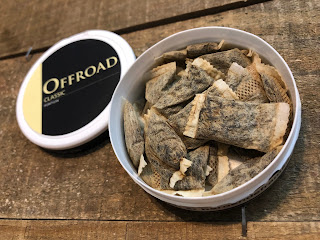 This is a really interesting snus.  If I had to describe it best, it seems to be like a beefier Phantom Original Portion (for those who have had that one before).  It's a budget snus, but it doesn't taste budget.  The aroma is a rich, earthy tobacco character with a light tea/herbal type presence.  The portions are nice and plump, quite moist, and have a quick flavor release!  The flavor is a present taste of tobacco; it is robust and earthy, and quite flavorful.  I do pick up a mild tea-like presence, but it's not overtly citrus.  The flavor is mostly front and center tobacco.  It's really good, and very well balanced.  The nicotine level on this one feels to be about the regular strength level.  I find the flavor lasts about 45-50 minutes on average!
Rating and Final Thoughts
I rated this one at 3.96 out of 5.  For a budget snus, that's a pretty high rating for me.  This is a great snus.  In the past, Offroad has been hit and miss in terms of quality, but this is one of V2's best products, in my opinion.  If you've never had it before and you like the taste of tobacco, this is a must try.  Lovers of Phantom, if you haven't had this one, grab a can.  You'll really dig it.