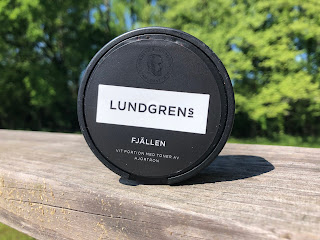 Fielder and Lundgren is back with a new snus in their Lundgrens line, Lundgrens Fjällen! Now, this is new, but also old. Lundgrens has been bringing back limited edition flavors and this is a return of another flavor from the past that I really enjoyed, Lundgrens Kebnekaise, which was a limited edition release in the Winter of 2018!  Fjällen, from what I can tell, translates to "mountain" in English.  Which is cool, because that limited edition actually had a mountain in it.  The flavor description for this one says "Lundgren's next destination is inspired by the flora of the Swedish mountains.  Lundgrens Fjällen has a taste of cloudberry."  Each can weighs 19.2g and has 24 portions for 0.8g portions.  The nicotine content is 10mg/g (1.0%), or 8mg/portion. 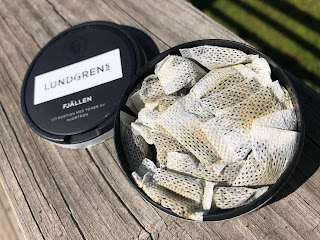 When you open the can, the aroma that comes through is a mild, but tart berry smell along with light tones of pine. There's a gentle tobacco presence in the background, as well. The portions are, of course, the perforated type. They have a quick release of flavor, but also a long lasting taste due to the white portion format! The flavor is a pretty interesting mix! I notice a taste of pine, along with a mild touch of tobacco. The cloudberry is relatively mild. It's not as sweet as GR Hjortron, for example. It's mildly sweet, but also mildly tart. The flavor lasts up to about an hour on average, sometimes a little longer! The nicotine strength on this one feels to be right at the regular strength level.  All in all, it's a pretty tasty snus!  It's definitely one I'd get again.

Also, a shout out to our friends at NordicLip.com who helped us get ahold of this one.  Today, I noticed that SnusMe.com has picked it up to the US as well, for those who are here in the USA.
Posted by Chad Jones at 6:22 AM