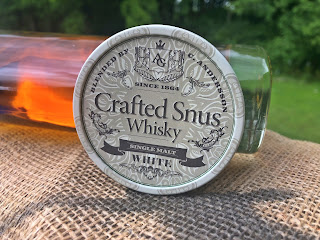 NOTE:  This is the old review.  In mid-2020, it changed to plastic cans.  Check out the new review here!

It’s been 4 years since I’ve reviewed this one, so I figured it was time for an update! Crafted Snus Whisky is a craft snus created by Conny Andersson, produced by AG Snus in Denmark. This snus is made of six different tobaccos containing 100% Lamina, meaning no filler - only full tobacco leaves! This tobacco contains Mata Norte (from Brazil), Latakia and Green River (Amish tobacco from Green River/Pennsylvania, USA). There are also tobaccos from Kurnool (India), Guatemala and Spain. The tobaccos are aged for more than two weeks in whisky barrels from Glenfarclas Distillery, which is the single malt/Scottish Highlands whisky used to blend this snus.

There's a few whiskey products on the market, and I enjoy them all, but for different reasons. I like Islay Whisky Snus (GN Tobacco) for the tobacco taste, General Mackmyra (Swedish Match) for the tarry taste, but this one for it's intense whisky presence.  If you like whisky, this is the snus you want. 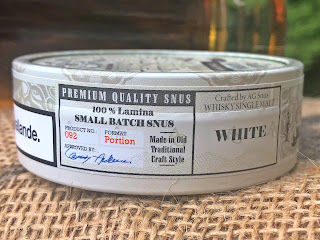 The flavor description for this one says, "Premium quality tobaccos, including Mata Norte and Latakia, are matured in used whisky barrels and flavored with a Highland region single malt whiskey, Conny teases out tones of chocolate and walnut creating a one of a kind craft portion snus." It comes in an 18 gram can with 20 portions, for 0.9g portions.  The nicotine content is 11mg/g (1.1%), or 9.9mg/portion. 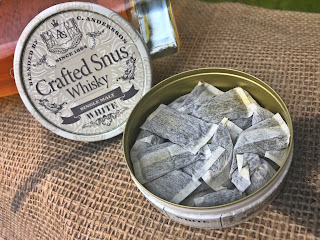 When you open the can, the whisky aroma is quite present for a white portion. It's not a weak aroma. There's a light wood presence, and a light touch of smoke. The portions are nice and plump, and feel quite big for only 0.9g portions. It's one thing I love about AG Snus. The flavor is more mild than the original portion version, but it's still pretty present. The whisky flavor is right up front, with a gentle earthy tobacco character in the background. There's a little oak in the background, a light smokiness, and a hint of chocolate. It's very well rounded, and has quite a present taste for a white portion. The nicotine on this one feels a little less than the strong level, and the flavor lasts about an hour on average!

If you like whisky, this is the snus you'll want to pick up.  It has the most present whisky flavor of any of them.  I also like it more than the original portion version because it seems to be more well balanced in the flavor department.
Posted by Chad Jones at 2:56 PM