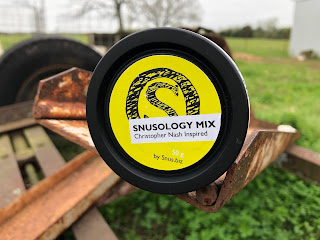 Today, I'm going to be reviewing a new collaboration with Snus.biz: The Snusology Mix! For those who don't know, Snusology.com is a website that I run with my buddy Christopher Nash. It originally launched as GoSmokeless.org on 9/3/2011, and rebranded as Snusology.com on 5/27/17.  I've done quite a few Snubie collaborations with Snus.biz - Blood Orange/Goji Berry Lös,  Mr. Bacon Lös, Cheese/Bacon Lös,  and Cherokee Rose Lös.  This is the first release branded under the Snusology label, and is the brainchild of Nash, who's talked about making a rum snus for many years.  Heck, I've wanted one ever since I reviewed Kardus 2009, a delicious rum flavored snus released back in 2009.  Well, Snus.biz, in collaboration with Snusology.com, have brought an insane new snus forward.

The flavor description for this one says "The flavor of the Snusology Mix is rich and complex. Appleton Estate, a dark rum aged for 21 years, was used as the base, and flavored with Daskalidès, an Extra Dark (77%) Belgian Dark Chocolate. There are notes of roasted almonds, nutmeg, and molasses. The snus was aged in bourbon oak barrels, which contributes a light hint of oak. The Snusology mix uses Cuban Tobacco, particularly the Criole del Sol and Vuelta Arriba varieties."  Each can weighs 50g, just like the good old days, and has a nicotine content between 15mg/g and 18mg/g. 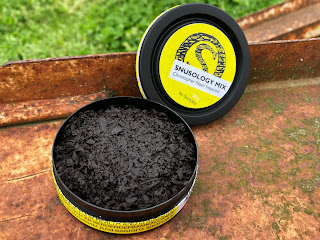 When you open the an, the aroma that greets you is a spicy, dark rum smell. There are hints of dark chocolate, and a light touch of oak. This snus comes in the combo grind, which is a mix of fine and coarse grinding. It’s nice and moist, and has a quick release of flavor! The taste is utterly brilliant. The spicy, dark rum flavor is front and center. Behind it are hints of oak, dark chocolate, and a light nutty character. The Cuban tobacco base is earthy, and slightly peppery. I find the nicotine to be around the strong level, and the flavor lasts about 45 minutes on average. To sum it up:  it's beautiful.  If you like rum, and you love a good, quality loose snus, this is the one you want to go for.

So, how do you get it?  If you're interested, send an email to hello@snus.biz, and they'll take your order for this delicious snus.  I hope you all enjoy it as much as I do, because it's quite tasty!
Posted by Chad Jones at 6:42 PM