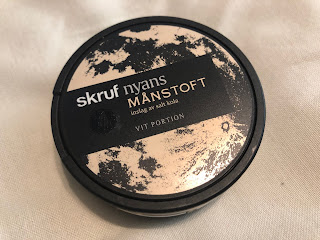 It's been about a year since Skruf launched the Nyans line, a value priced line with some unique flavors. They originally launched with Jordskott (earthy berry flavor), Solglimt (grapefruit flavor), and Havsbris (sea breeze flavor).  Now, they've added two new flavors, Månstoft (salted caramel) and Norrsken (violet licorice).  I did a little Google Translate magic, and Månstoft translates to "moon dust".  I'm not sure how salted caramel relates to moon dust.  Caramel isn't exactly a common flavor in snus.  V2 Tobacco is really the only company that has done it, with their snus version in 2014, and a chewing tobacco version in 2015.  And now Skruf is giving it a go!  The flavor description says, "A taste of traditional tobacco flavor with hints of salted caramel." Each can weighs 17.6g and has 22 portions, for 0.8g portions. The nicotine content is 8mg/g (0.8%), or 6.4mg/portion. 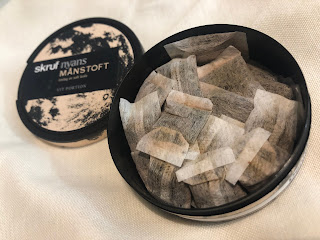 When you open the can, the aroma is a mildly sweet, present smell of caramel. The portions are nice and plump, and quite soft; they feel great under the lip. The flavor is, as expected, a present, salty caramel taste. It’s really interesting. The nicotine feels to be about the regular strength level, and the flavor lasts around 50-55 minutes, on average. For me, this snus isn't an all day snus. It's more like an Olde Ving Fudge, which I consider to be a dessert snus. But it's quite tasty, and Skruf nailed the flavor of salty caramel!  I imagine if you like a sweeter tasting product, this would be one you enjoy.
Posted by Chad Jones at 8:24 AM