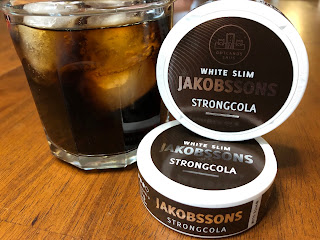 Today, we're talking about a brand new product from Gotlandssnus, Jakobssons StrongCola Slim White! As you probably already know, I really enjoy cola flavored snus. My all time favorite Cola snus is Thunder Cola, which sadly was discontinued a few years ago. After that was discontinued, Gotlandssnus launched Jakobsson's Strong Cola (Original), which I've kept in rotation since it launched.  However, I felt the flavor was a bit much, so I can't use it full time. This one, however, fixes that! I got a few cans of it from SnusMe.com, and I've really, really been enjoying it!  The flavor description says, "A smaller portion with less drip.  Has a clear taste of cola with some sweetness and notes of citrus. A long, narrow, dry surface with a low moisture content and a lasting taste release."  Each can weighs 13g and has 20 portions for 0.65g portions. The nicotine content is 14mg/g (1.4%), or 9.1mg/portion. 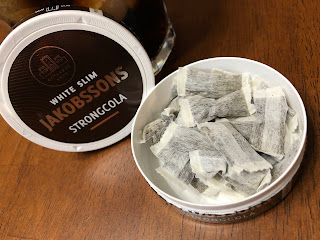 When you open the can, the aroma is a present, lightly sweet cola smell. It's less present than the original portion version, but you still get a pretty present aroma. The portions are slim, and almost silky smooth to the touch. They're only 0.65g each, but they still feel pretty substantial in the lip. The flavor is a pretty balanced, tasty cola flavor. The cola flavor is present, but milder than the original portion version. It has a mild sweetness to it, and tastes quite refreshing.  The nicotine strength, while 14mg/g, is only 9.1mg/portion and feels to be around the regular strength level. I find the flavor lasts quite a while; I can enjoy it for a little over an hour on average!  This snus has already worked it's way into my full time rotation, that's how much I like it.

If you like cola snus, this is a must try.  It is a very well balanced, refreshing, tasty snus!
Posted by Chad Jones at 9:53 AM