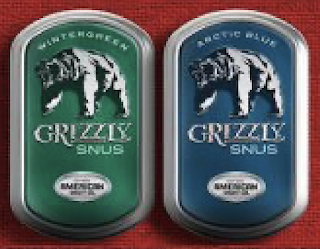 It looks like Grizzly "Snus" has been trademarked as of March 5th, 2020. For those who don't know, Grizzly is a popular American moist snuff brand sold in the United States, made by American Snuff Company.  The photo isn't the best, but it gives you an idea of what they're going for.  It appears as though they're going with the Camel "SNUS" design popular here in the United States.  There will be two flavors - Wintergreen, and Arctic Blue.  As of now, we don't know much about how it's made or anything, or if it's just dip rebranded as "snus", like with Skoal "Snus".

But this banner, I hope they don't end up using this.  For years, I've talked about the difference between American "SNUS" and REAL Swedish Snus.  I'm not going to say this is a stab at me and the REAL Snus Movement, but who knows. I'm still interested to try this stuff, and I'm hoping that American Snuff Company will come out with how they made them.  And I'm hopeful they're good, because more snus, made the right way, for the US, is a good thing!  So we'll see what happens!
Posted by Chad Jones at 8:09 AM