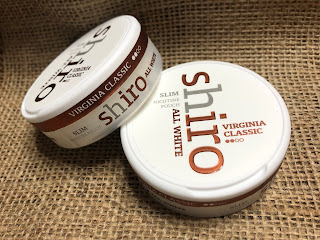 Well, AG Snus has done it - they were the first company to create a tobacco flavored nicotine pouch product. Up until now, we've had every flavor under the sun except tobacco, including: Apple Mint, Blackberry, Black Currant, Blueberry, Cinnamon, Citrus, Coffee, Eucalyptus, Ginger Blood Orange, Grapefruit, Licorice, Lime, Melon, Rhubarb, and Wintergreen.  I'm honestly amazed it took someone this long to make this.  Virginia Tobacco is a flavor of e-liquid, so I figured it was just a matter of time!  I've reviewed AG's other Shiro products before, but those had a mint flavor.  Your fun fact for the day:  Shiro means white in Japanese.  Also, my favorite band is from Virginia, so that got some points for me.

The flavor description for this one says, "Shiro Virginia Classic has a soft and round taste of tobacco with a natural sweetness."  Each can weighs 12g and has 24 portions, for 0.5g portions.  The nicotine content is 12mg/g (1.2%), or 6mg/portion. 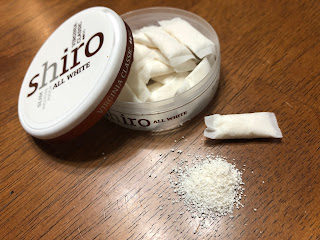 If you're not familiar with nicotine pouches, these are products that are similar to snus, except they don't contain tobacco.  They do have nicotine, and usually some form of plant fiber or cellulose.  They're great for people who may want to quit smoking, or vaping, or dipping, but still enjoy nicotine.  And these are great for people who want to quit tobacco, but miss the taste of tobacco! 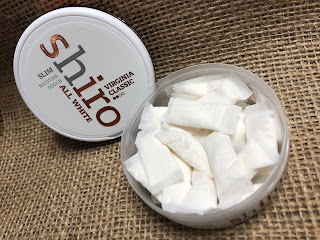 When you open the can, the aroma is rather cooling, perhaps due to a presence of menthol. There's an earthy presence, and a light wood note. The portions are slim, soft, and comfortable in the lip. They also seem to have a gentle cooling sensation to them as well. I also notice that cooling presence in the flavor. The flavor has an earthy presence, a mild sweetness, and a light caramel taste. It's very interesting. It doesn't taste like a clone of tobacco, but it's reminiscent of tobacco and has a tobacco-like presence, if that makes sense. The nicotine strength feels to be around regular strength. The flavor generally lasts around 35-45 minutes.

As far as this one goes, it has an interesting taste.  I don't personally use nicotine pouches, but if you're someone who does and you are someone who misses the taste of tobacco, you may enjoy this one!  It's certainly unique!
Posted by Chad Jones at 6:45 AM