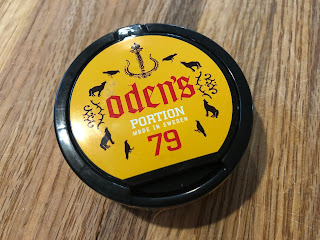 It's rare that a snus exists that I'm not aware of, however this is one that I just learned about. I recently did an order with SnusMe.com to get some favorites, and saw a listing for Oden's Extreme: 79 Ginger Lime (Original Portion), in the regular strength format. Back in 2013, I reviewed the extreme version of this snus, but had no idea that a regular strength version existed! Fun fact, when GN Tobacco first began making snus back in 2010, one of their first products launched was one with a ginger/lime flavor - Olde Viking Ginger/Lime.  I wasn't a big fan of that one, but I did enjoy the taste of the Oden's Extreme Ginger Lime.

The flavor description for this one says, "Odens 79 Portion gives a well rounded and aromatic tobacco blend with sour lime flavor, which does not take over the classic tobacco flavor."  This particular can weighs 18g and has 18 portions for 1g portions.  However, a recent law change in Sweden says snus cans must have at least 20 portions per can, so I imagine that will change soon.  Perhaps 20 portions at a gram each.  The nicotine content for Oden's regular strength products is usually 9mg/g (0.9%) and 9mg/portion. 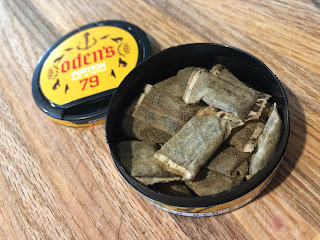 When you open the can, there is a lightly sweet smell of ginger with a mild hint of tart lime. The portions are plump, and moist, but not overly moist. They're also quite comfortable in the lip. They also come with a quick release of flavor! The flavor of this one is quite good. The ginger and lime pair very well together and come through in almost equal amounts. The ginger is light, and mildly sweet. The lime is tart, but natural tasting. The nicotine on this one feels to be around regular strength, and I find the flavor lasts up to about 45 minutes on average!  I really enjoyed this one.  I don't have any GN Tobacco products in my rotation, but this one might actually be the first!
Posted by Chad Jones at 4:33 PM