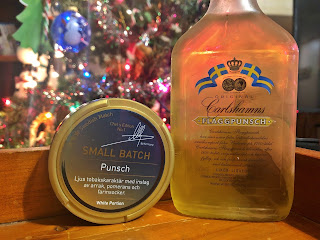 Swedish Match has released the 13th release in their Small Batch series, but this one starts the series over at No1 with a new line: Small Batch Chef's Edition.  When it comes to this release, Swedish Match describes it by saying it is "A limited edition snus in which recognized pubs produce flavors inspired by their own cooking."  If you want a recap of the past 13 releases, check out my review of Small Batch 12: Pink Grapefruit.  This new release is a collaboration with Chef Karl Ljung, who Swedish Match previously collaborated with on General Kardus Spring 2018, General Gastronomy Summer 2018 (Original Portion, and General Kardus Winter 2018. 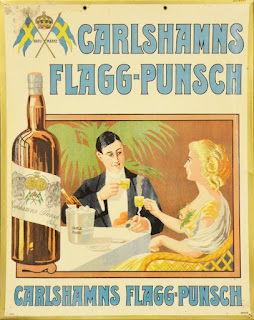 If you aren't familiar with punsch, don't feel bad. I'm wasn't too familiar with it either; it's not something very common in America. This is what Swedish Match had to say about it: "The Swedish punch is a unique product with a long tradition. Its history dates back to the 18th century when arrak, the main ingredient in punch, began to be imported from the East Indias. The first cargo came to Gothenburg harbor in 1733 with the ship Friedericus Rex Suecia. The ship was loaded with crockery, spices and arrack. The punch's special taste comes from several ingredients distilled together, including rice, sugar cane and palm juice. The drink is then stored in barrels."  I've been reviewing snus for almost 11 years, and this is the first snus I've ever had with punsch.  Kardus 2010 had a flavor of arrack, so that is probably the closest I've been to a similar flavor profile. 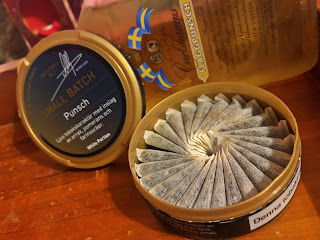 The aroma is definitely a pungent, present smell. It reminds me a little of rum; it's dark, and has a light spice to it.  The portions come in the star formation format, so I suggest giving them a nice fluff.  They're quite soft, and feel great in the lip. The flavor mostly reminds me of a spicy, dark rum.  There is a mild tobacco character, along with light tones of citrus.  This snus also has a light, syrup-like sweetness to it.  It's a very interesting, complex snus, and unlike anything I've reviewed before.  But it's super tasty, that's for sure.  The nicotine feels to be about the regular strength level, and I find the flavor to last about 45-55 minutes on average.

I really enjoyed this one, and it was a great first release in the new Chef's Edition series.  I'm looking forward to seeing more collaborations with other chefs!  This product is available exclusively on the Swedish Match e-store, and at Swedish Match stores in Stockholm, Göteborg, Lund, Strömstad and Åre.
Posted by Chad Jones at 3:33 PM