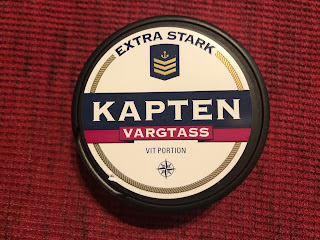 Lingonberry, surprisingly, isn't a common flavor in the snus world. Kaliber+ Original, Göteborgs Rapé Lingon, and Mustang Lös are the only products I can think of that have a lingonberry flavor. AG Snus seems to have noticed that, as they have released Kapten Vargtass!  The flavor description for this one says, "Kapten Vargtass Strong White Portion has a lingering taste of lingonberry, with a traditional snus flavor as a base."  This product comes in an 18 gram can with 20 portions for 0.9 gram portions. The nicotine content is 15mg/g (1.5%) which breaks down to 13.5mg/portion.  If you're like me, and not familiar with the word "vargtass", I'll explain, because I had to look it up as well. 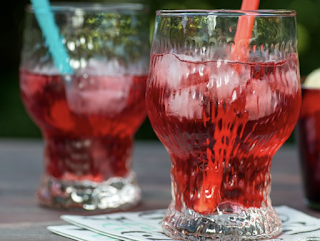 Vargtass, or "wolf's paw", is an alcoholic beverage containing lingonberry. From what I've read, it originates in northern parts of Sweden and Finland, which is why I'm probably not familiar with this one.  Honestly, I hadn't heard of this drink until I had to look up the meaning of the name of this snus. The drink itself is made of lingonberry and vodka. You can also make a Vargtass Royal by adding sparkling wine. When you open the can, the aroma is a smell of lingonberry, a hint of wood, a mild tobacco character, and a hint of menthol. The portions are plump, soft, and surprisingly come with a little cooling presence once you put one under the lip. The lingonberry flavor is pretty present, and comes through in a fresh/cooling way, perhaps due to a menthol addition. There’s a mild tobacco character in the background, and a light hint of wood. It’s a very interesting and unique flavor. The nicotine feels to be about the strong level, and I find the flavor lasts about an hour on average.  It was a very interesting, unique flavor. I could see myself getting a can of this here and there when I'm in the mood for something different.

If you're interested, I've seen SnusBolaget sells it for Sweden, and SnusMe sells it for the US.
Posted by Chad Jones at 12:06 PM