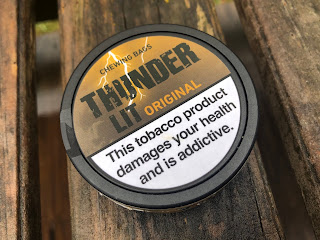 A lot of V2 chew bag products have gone through redesigns, so I'm doing a bunch of these chew bag reviews this week. This is one that used to be known as Thunder Original: Ultra Strong (Original) Chew Bags. I was surprised to see I haven't reviewed this one before. I know, weird, one that I missed. It has been rebranded as Thunder LIT: Original (Original Portion) Chew Bags, and now comes with a new design to go with it.  The flavor description for this one says, "Thunder LIT Original Chew has a traditional tobacco flavor with hints of bergamot."  Each can weighs 17.6 grams and has 24 portions for 0.73g portions.  The nicotine content is 22mg/g (2.2%), which breaks down to 16.13mg/portion. 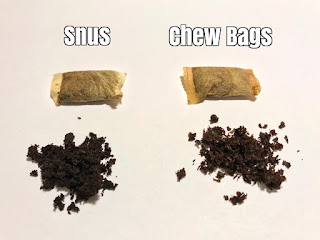 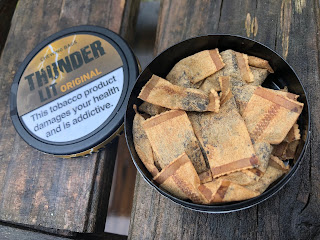 When you open the can, there is a nice earthy tobacco smell that comes through with a tea-like quality to it. The portions are moist, soft, and have a quick release of flavor under the lip! The taste is a mild, earthy tobacco taste. There's also that tea-like presence I pick up in the aroma. The flavor, on average, lasts about an hour, which is impressive for an original portion. The nicotine feels to be right at the extra strong level, as well. When everything these days is mint, it's nice to know there are still non-mint products out there. For folks in the EU with a more limited selection, I imagine it's a welcome change to see something that isn't mint flavored.  This one is pretty solid, and tobacco lovers will probably enjoy it!
Posted by Chad Jones at 7:15 PM