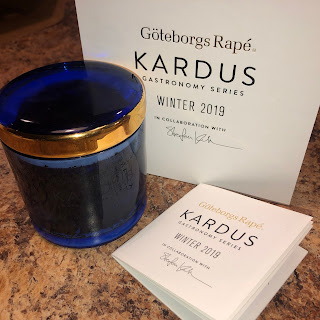 Christmas came early with this release - today we're talking about Göteborgs Rapé Kardus (Winter 2019)! This year, Swedish Match has released the first GR branded Kardus, and I couldn't be more excited. Göteborgs Rapé is my second favorite snus after General, so this is big news!  It is also the 100th year anniversary of GR this year, so this release is very appropriate!  Be forewarned, this review will be a long one, but since I paid 999 SEK ($103.19 USD) for it, I think it's worth the long review.  I got #127/1070 made.  This year is a collaboration between Swedish Match master blender Lars Öberg and Stefan Karlsson, another well known Swedish chef. Karlsson says, "One of the coolest things about being a chef is to see what happens when you add or remove a certain flavor. In the same way as when I look for the right seasoning for my dishes, I have gone as far as working with Lars Öberg on the flavors for this year's Göteborgs Rapé Kardus." For the flavor description, for this product the focus was on enhancing the flavors of Göteborgs Rapé (juniper and lavender) and enhancing it with forest flavors. The tobacco flavor is of a medium dark nature and there are also said to be notes of coniferous forest, herbs, and dried fruit. The nicotine level is 14mg/g (1.4%).  Each can contains 150 grams of tobacco.

This is the 10th's Kardus I've reviewed since 2009, so pictured here is ten years of Kardus.  We'll go left to right in this picture for a brief history of Kardus.  Kardus 2009-2012 came in small wooden boxes. Kardus 2009, still my favorite, was flavored with Guatemalen rum that was stored 23 years in oak barrrels. Kardus 2010 (or, as I called it, "Pirate Kardus") came with a piece of china recovered from the wreck of the East Indiaman Götheborg and was flavored with arrack. Kardus 2011, or Kardus Carnival Blend, was flavored with Cachaça, Brazil's most popular spirit. Kardus 2012 was flavored with sherry from Jerez in Spain.  The Kardus series would take a break from 2012 to 2015, then return with a new line:  General Kardus.  General Kardus Selection 2015 was really focused on tobacco quality, and had a great blend and flavor mix. General Kardus Fäviken 2016 was a collaboration with Swedish chef Magnus Nilsson from the Fäviken Magasinet Restaurant and Hotel in Sweden, and was a tobacco/herbal/berry type of flavor. Kardus 2017 was a collaboration with Hernö Gin, and tastes like a mix of General Snus and Göteborgs Rapé - it also came in a neat 3D printed container.  The Gastronomy series would launch in 2018 with General Gastronomy (Spring 2018), a collaboration with restauranteur Karl Ljung, which had a herb-heavy flavor. General Gastronomy (Winter 2018) would follow that one, and was another collaboration with Karl Ljung. That one was more floral than herbal.  And now, we have Göteborgs Rapé Kardus (Winter 2019)! 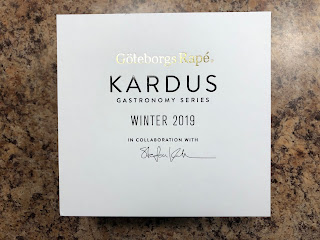 This year's release comes in a smaller white box, like the last two Kardus releases in the Gastronomy series. 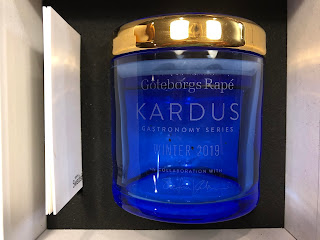 Inside the box is a beautiful blue glass container with a gold lid, as well as a little book that has information about the release.  Like the past few Kardus releases, this year's release comes in a hand blown glass by Swedish glass maker Orrefors. Orrefors is the largest glass manufacturer in the Nordic region, and is a symbol of the Swedish glass industry. The vessels are mouth-blown by skilled glass blowers from Kosta and each vessel is individually numbered. Signatures are blasted in each vessel and, because the glasses are handmade, each vessel is extremely unique and one of a kind! 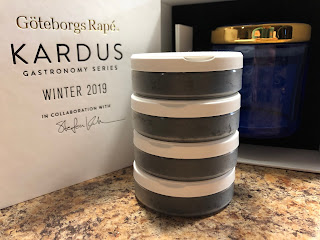 Usually when I get a Kardus release, I like to break it down into individual size cans.  This way I can use it on the go, and not have to carry around the big glass vessel.  I am the king of cargo shorts, but I don't think I can fit this glass vessel in my pocket. 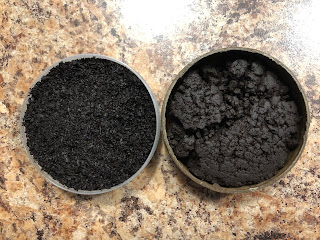 I've had some requests for this, so here is a comparison between Göteborgs Rapé Kardus (pictured left), and Göteborgs Rapé Loose (pictured right).  Regular loose snus is ground, but Kardus is of the single cut type.  In Kardus, it is 100% lamina, meaning only the best parts of the tobacco are used. Kardus snus is cut to 0.72mm. The texture is a lot like long cut tobacco, so it is going to look much different to ground lös snus if this is your first go with a Kardus product.  It's not as easy to handbake as regular lös snus, but it can be done.  It just takes a little practice. 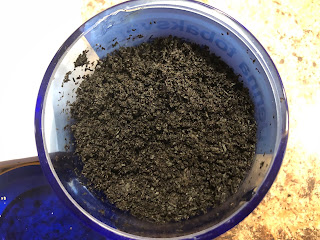 Now you're probably like, "Dude, get to the review already!"  The aroma has the components to regular GR, it has a present smell of juniper, hints of citrus, a mild tobacco character, an herbal quality, and a lightly sweet hint of spruce. The long cut tobacco is quite moist, and pretty easy to work with.  Once in the lip the flavor releases pretty quickly and is quite delicious.  It tastes a lot like regular GR - the juniper flavor is very present, along with tones of citrus, a lavender hint, and a well rounded, earthy, darker tobacco taste.  The herbal character seems to be more present, and there's also a nice taste of spruce.  It's like regular GR, but with a more amped up herbal taste, plus added spruce.  The nicotine feels to be between regular strength and strong with a 1-1.5 gram prilla.  The flavor lasts, on average, about 45-50 minutes. 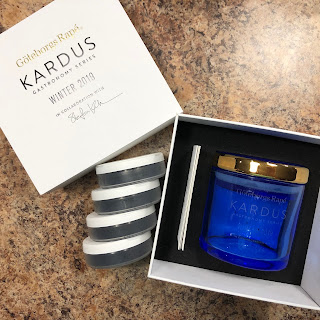 I really enjoyed this year's Kardus release.  As a major fan of Göteborgs Rapé, and this was a very fitting release for the 100 year anniversary of GR.  Lovers of GR will enjoy this one, as it is like GR, but with added herbal and forest type flavors.  I'm really hoping they do like they did with the last General Gastronomy product and release a portion version.  Don't get me wrong, I love GR, but if this was out there as a portion version, it would replace GR for me.  No kidding.  At this time, it isn't available to the US, unfortunately, but if you're somewhere that can get this, I suggest trying it.  Also, they released 300 cans for Norway, in the Pantone 448C color, which I think actually looks pretty legit.  But, two thumbs up, Swedish Match.  I really enjoyed this one!
Posted by Chad Jones at 11:40 AM