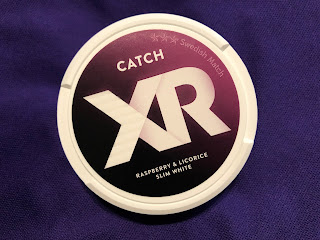 Oh happy day, Swedish Match has released one of my favorite flavors of the Small Batch series in a full time release: Catch Raspberry & Licorice XRANGE (Slim White)! In July of 2017, Swedish Match released Small Batch #4 Raspberry Licorice, which is one of my favorite releases from that series. It was so popular that it came back again a little while later, and the flavor even lived on in R42 Red Licorice (Super Strong).  The XRANGE series has now grown to 8 products with this release!  The flavor description for this one says, "Light tobacco character with clear elements of raspberries, and some licorice and anise."  Each can weighs 16.8g and has 21 portions, at 0.8g each.  The nicotine content is 8.5mg/g (0.85%) or 6.8mg/portion. 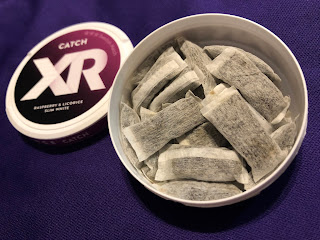 If you had the old Small Batch: Raspberry Licorice, this one is virtually identical, but in a slim white portion. When you open the can, the aromas of raspberry and licorice are pretty evenly matched in terms of presence. The portions are slim, and quite comfortable in the lip! In the flavor, I seem to notice raspberry first, and it comes through in a pretty natural way. The licorice flavor is also pretty present, and works very well with the raspberry taste! There’s also a mild tobacco taste in the background. The nicotine feels to be about the regular strength level, and the flavor lasts about an hour on average.  This snus is utterly delicious, and is being added to my rotation.  It is, in my opinion, the best licorice product on the market today!
Posted by Chad Jones at 6:36 PM