Swedish Match created the Super Slim format back in 2016 with G3 Mint SuperSlim. Now, 3 years later, they are releasing one of their main brands in this format: Göteborg's Rapé. What's interesting about this is that it's being released as a "prototype". This reminds me of the General 22 and Göteborgs Rapé 22 products they released back in 2017, which served as the prototypes of the General One White and Göteborgs Rapé One White products released a few months later.  About this release, Swedish Match says, "The new, discreet format does not compromise with the experience and comes in a smaller box that takes up less space in your pocket." 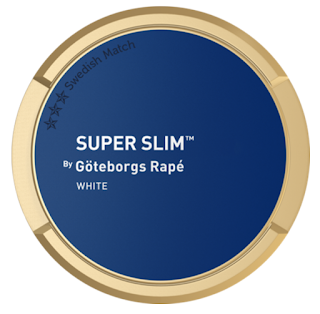 Aside from that, the flavor is still the same. Swedish Match says, "Light and spicy tobacco character with clear elements of lavender and juniper, as well as light hints of wood and citrus. A long, narrow portion with optimized fit that is dry on the surface with moist content for low drip and a lasting taste flavor." The can weighs 10.6g and has 20 portions, for 0.53g portions. The nicotine content is 13.5mg/g (1.35%), which, with the super slim portions, breaks down to 7.15mg/portion.

I imagine this will be a product only available in Sweden, so I don't expect US consumers to be able to get it, as usual.  It seems like we get left out for a lot of the special SM releases.
Posted by Chad Jones at 7:11 AM