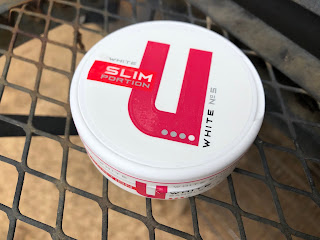 This is an interesting one. Back in April of 2017, I reviewed U-Sample Chew Bags, which included an original flavor version, also called No5. That product would eventually be discontinued, and the other two in that review would come back in 2018. A month or so ago, I noticed that No5 Original came back in a slim, chew bag version, but I haven't reviewed that one yet. Last week, I noticed SnusMe.com began selling what I believe is a snus version of that - U-Sample No5 Strong Slim White.  The flavor description of this product says it has a "balanced flavor of classic tobacco with citrus and bergamot".  This product comes in a 16.8 gram can with 24 portions for 0.7 gram portions. The nicotine content is 17mg/g (1.7%), which breaks down to 11.90mg/portion. 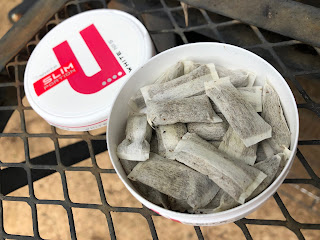 If you've had the old U-Sample Original chew bags that I reviewed back in 2017, this one appears to be identical to that one except it now comes in a slim portion. When you open the can, the aroma is a light, mildly sweet citrus smell with a hint of tobacco and some pepper. The portions are slim, soft, and comfortable in the lip. As far as the flavor goes, it's the traditional citrus/tobacco taste. The citrus flavor is relatively mild, and lightly sweet. The tobacco flavor is gentle, and in the background. There's a really nice peppery taste with this one that wraps around the citrus and the tobacco and really makes the flavor pop. In terms of nicotine, it feels to be between a strong and an extra strong. It has a little extra kick to it, but not too much. I find the flavor, on average, lasts about 45 minutes to an hour.

If you like traditional flavored Swedish Snus and want to try something new, you may dig this one.  I really like the U-Sample can design, as it is pretty unique and futuristic looking, as well.  I got this from SnusMe.com, as I think they are currently the only store selling this to the US.
Posted by Chad Jones at 6:50 PM