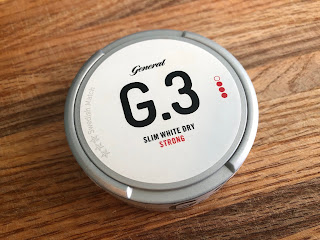 I saw this product on Northerner.com and found it interesting that that was the first store I saw it. Usually Swedish Match puts their products up on their webstore before anyone else, but it didn't appear to happen this time.  This is an interesting release, because it's a white dry version of their G3 Strong Slim White portion.  The flavor description of this one says "G.3 Strong Slim Dry White has a mellow and spicy tobacco taste with distinct notes of citrus and bergamot, along with hints of leather and tea". The can weighs 16.6g and contains 24 portions at 0.69g each. The nicotine strength is 20mg/g (2.0%), or 13.8mg/portion. 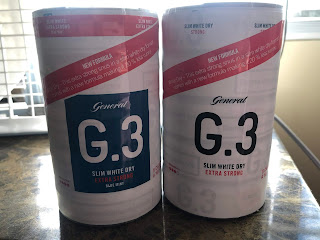 The packages these come in when you get 5 cans says “NEW FORMULA - White Dry. This extra strong snus in a slim white dry format comes with a new formula making it 20% less runny.”  I talked to Swedish Match yesterday, because I was curious why this product was on their webstore but G3 Strong Slim White was no longer listed.  Also, this product on their store now says "New Design", even though this is a brand new product.  Swedish Match informed me that this product would actually be replacing the white portion version.  So the G3 line now has a white dry strong version, but not a white strong version. 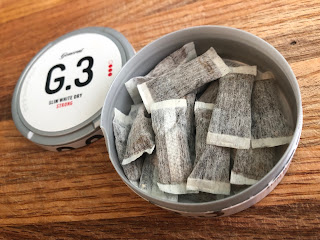 When you open the can, the aroma that comes through is a peppery tobacco smell with a hint of citrus. I notice the citrus to be more mild in this one than regular General. The portions are, of course, dryer than your average white portion. They're slim, and have a good fit in the lip. Even though they're a little dryer, they're not uncomfortable or anything.  The flavor is pretty mild.  It still has a presence of General, but it's a little different.  Like the aroma, I do notice the citrus, but it's much more subdued.  I notice a lot more of the tobacco taste with this one, and it seems the pepper is more present as well.  It's a pretty interesting taste!  The nicotine on this one feels to be firmly at the strong level, and has a nice kick to it.  The flavor lasts a really long time, which is a benefit of the white dry format.  I find, on average, I can keep one of these in for up to 1.5 hours!

If you like General, and want something with a dry format and a long lasting flavor, this one may be right up your alley!
Posted by Chad Jones at 3:51 PM