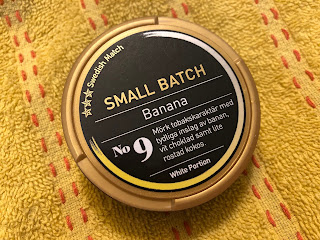 Swedish Match has released their latest in the Small Batch series, this one with the surprising taste of banana!  So far, we have seen a wide variety of flavors in the Small Batch series.  At the bottom of this review, I'll list them all and link to my reviews of the previous Small Batch releases as well as my rankings of them.  Swedish Match describes the small batch series by saying, "We at Swedish Match have produced thousands of products over the course of a few hundred years. Our experts are experts in the correct sense of the word. But they have not been tired of developing new ideas. In order for them to get that opportunity - and for Swedish snusers to be able to share it all - we now launch a new range of products called Small Batch, where the flavor is replaced several times a year. Each flavor is produced in a small edition."

The flavor description of this snus says, "For the development of this product, we have gained inspiration from the taste balance between the banana and chocolate. Mature banana meets coconut and white chocolate. A rich and full-bodied taste that still has the undertones of tobacco."  It comes in a 24 gram can with 24 portions for 1 gram portions.  The nicotine strength isn't listed but I'm assuming it's regular strength. 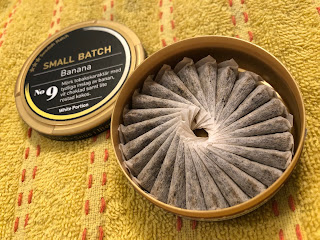 Going into this one, I wasn't sure what to expect. This year was actually the first time I'd seen a banana snus released since I started snusing in 2009. A few months ago, V2 released the Thunder Heritage (Chew Bags) Limited Edition set, which contained a banana/mint snus, so it's interesting to see two banana products released in the same year. As far as this one goes, the aroma seems to be an even balance of banana and chocolate. There's also a hint of cocoa powder in the background, as well. It's not overly sweet, either. The portions are white, soft, and comfortable in the lip. As they come in the star formation, I do suggest fluffing them before you put one under the lip.  The flavor is pretty enjoyable and is certainly a dessert type snus.  The banana flavor is pretty apparent, and natural tasting.  It is accompanied by a smooth chocolate flavor in the background.  The two flavors actually work pretty well together.  The nicotine strength feels to be about the regular strength level.  The flavor, on average, lasts up to about an hour!  As far as this one goes, I really enjoyed the taste of it.  This wouldn't be a full time product for me, rather, it would be something I would use for a dessert snus after a good meal!