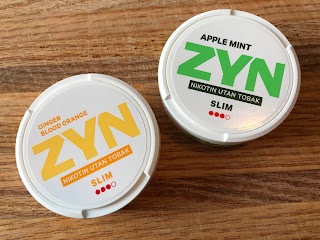 Swedish Match recently launched two new Zyn products - Zyn Blood Orange and Zyn Apple Mint. These are products with familiar flavors as they have both already existed in the G4 line. These products, however, don't contain tobacco like the G4 line does.  Also, these are the moist Zyn products, not the dry/mini ones like we get in the US.  As these products aren't available to the US, I wanted to send a thanks out to my friend Michael who grabbed these for me from SnusBolaget. If you're new to Zyn, this is how Swedish Match describes this product: "NICOTINE WITHOUT TOBACCO: ZYN is for those who like to enjoy nicotine but dislike the experience of tobacco. You can use ZYN anytime and anywhere - just put the portion under your lip.” As the nicotine pouch category is growing, we're seeing more different ways companies will release products that contain nicotine but don't actually contain tobacco. 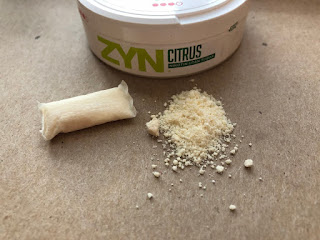 When is Zyn not Zyn? If you're used to the Zyn products sold in the US or those sold as "Zyn Mini Dry" in Sweden, these probably look quite different. They aren't as dry, and they look much like the other all white snus products sold on the market. These don't contain tobacco, however, so they're not going to be like an Epok or a G4. These are going to be closer to Skruf's new Skruf SuperWhite. This Zyn product is a moist product, still tobacco free, and containing nicotine, vegetable fiber and cellulose powder (E-460). While it may look like other white tobacco products, it doesn't actually contain tobacco. 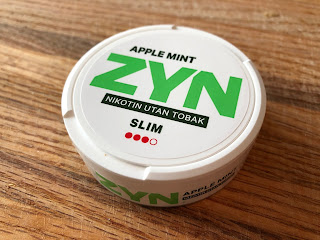 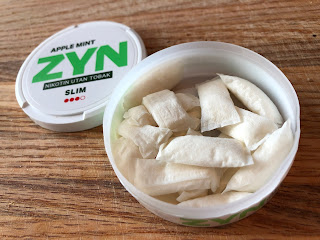 I really liked the taste of the G4 FU:ZN Apple Mint, so I was interested in seeing how close this one was to that one. When you open the can, there is a rather present smell of apple and a mild, lightly sweet hint of spearmint. The portions are soft to the touch and comfortable in the lip and, being a mint product, come with a nice cooling presence when you put one in! The flavor is very close to the G4 Apple Mint. The apple flavor is gentle, but natural tasting. It's not too sweet, either, or artificial tasting. The spearmint flavor is relatively mild, and lightly sweet. It serves as a nice compliment to the apple character! The nicotine level on this one feels to be a touch stronger than regular strength. The flavor, on average, lasts about 45-55 minutes.  I was pretty impressed with how close this tasted to the G4 FU:ZN Apple Mint. 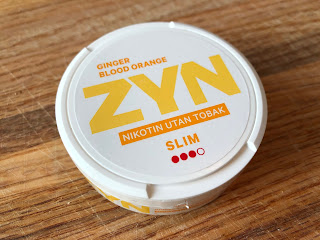 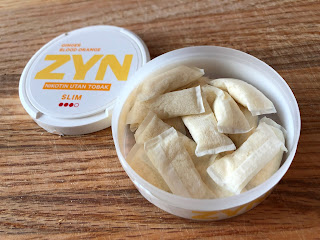 I really enjoyed the G4 Blush: Ginger Blood Orange, so I was excited to try this one. When you open the can, the aroma is a clear, fresh smell of orange. One thing I noticed about this one is that I notice more ginger in the aroma and taste than I did with the G4. The portions are slim, soft, and quite comfortable in the lip! As far as the flavor goes, it's very close to the G4 Blush product. The orange flavor is present and very natural tasting. I also notice a taste of ginger, which compliments that orange flavor quite well! This product isn't overly sweet, which I really like about it. The nicotine feels to be just a hair stronger than regular strength, but not too over the top. The flavor, on average, lasts around 45-55 minutes.  I was impressed with how close this product was to the G4 Blush, and I liked how
Posted by Chad Jones at 5:07 PM